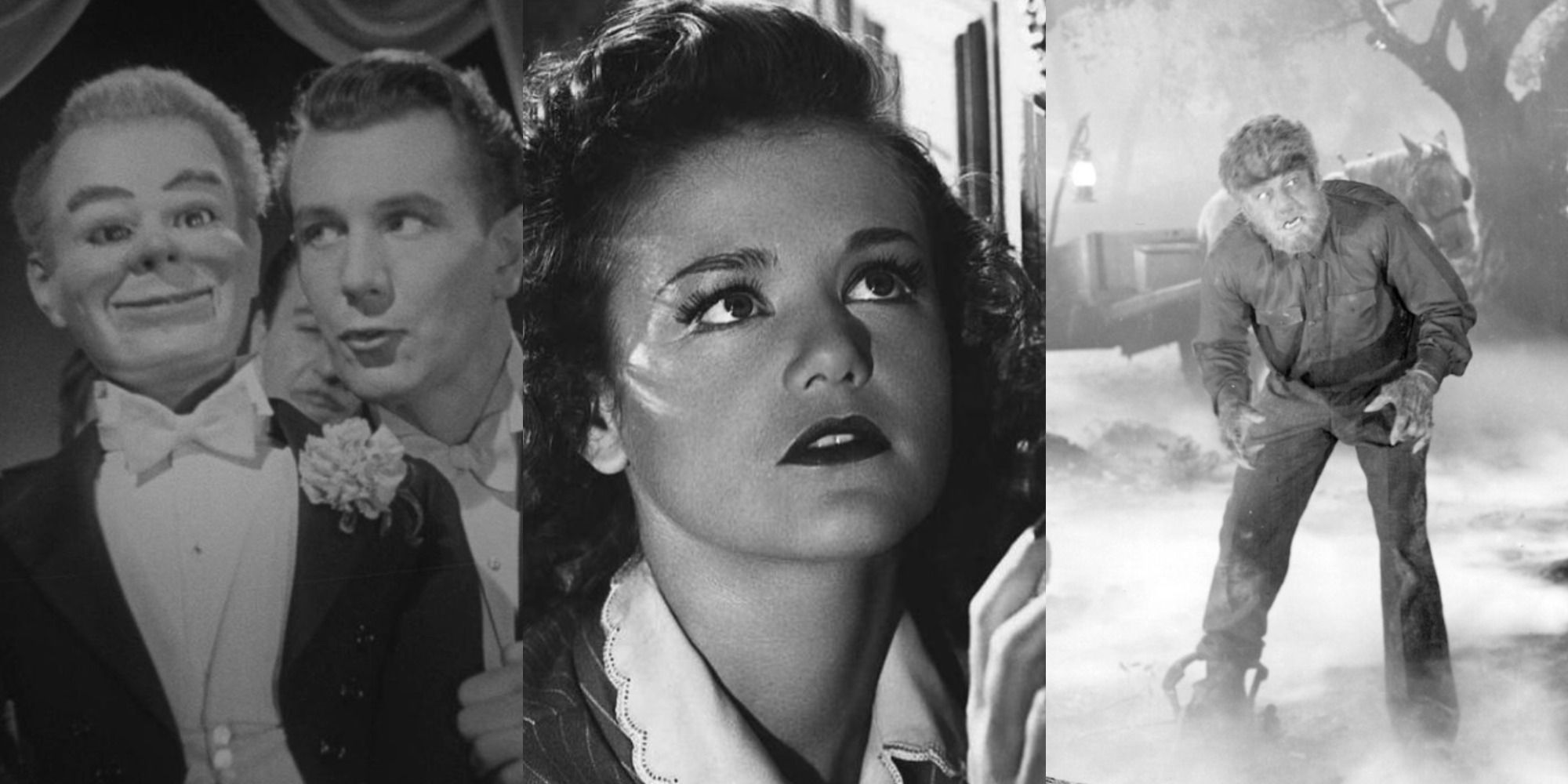 Some of the best horror movies of the 1940s came out of RKO and were produced by Val Lewton. He was known to let the viewer imagine his own horrors instead of being explicit, keeping everything in the dark.

Universal’s monsters were still hanging around, with Wolf Man added to the cast in 1941, but the series ran out of ideas and was getting somewhat outdated. There might have been too many horrors in the world back then for the monsters to keep up with.

In The werewolf, Lawrence Talbot returned to his ancestral home in Wales to reconnect with his family after years of absence. As he settles down and falls in love with a young woman, he is attacked by a wolf at night. Soon he discovers that he was not attacked by a wolf, but by a werewolf. That night he transforms into a wolf man and is now cursed for life.

It’s one of Universal’s more atmospheric horror films, full of fog and howls of wolves. Lon Chaney Jr., son of the silent movie legend, stars as Talbot / Wolf Man, the role that made him a star. Bela Lugosi, arguably the best Dracula, plays the fortune teller Gyspy who turned into a wolf, biting Talbot. Claude Raines plays the Senior Talbot with his usual talent and style. It’s a true horror classic.

Bud and Lou are two handlers, Chic and Wilber, tasked with delivering two very large, human-sized crates to the new horror exhibit. They turn out to contain Dracula and Frankensteins’ monster. Dracula escapes, planning to put Wilber’s new brain into the monster to revive it completely. Larry Talbot arrives to warn them but transforms into Wolf Man before he can.

RELATED: 10 More Universal Monsters That Should Be The Subject Of A Horror Reboot

The Monsters are together again, with Lugosi returning as Dracula for the first time since the original 1931 film. It’s one of the best in the Universal Monsters film series and it just works. The monsters are treated with respect, not as jokes, the comedy is hilarious, and the interaction between Bud, Lou and the creatures is both creepy and funny. It started a series of horror comedies, with Bud and Lou “encountering” even more monsters.

The heroine of the first film died at the end, but she is back as a ghost who befriends Amy, the daughter of her ex-husband and his new wife. The young girl also befriends Julia Farren, an aging and nearly forgotten Broadway actress who is estranged from her own daughter.

It is the continuation of the years 1942 The cat people by RKO, produced by Val Lewton under the direction of Robert Wise. This film has hardly any relation to the previous film and has less to do with actual horror than with loneliness and the lure of the past. Ann Carter as Amy the Little Girl is pretty good, and the film is overall well done, making it a deserving entry for anyone looking for the best horror of the decade.

Serbian national Irena Dubrovnik arrives in New York and falls in love with Oliver Reed. They get married, although she has reservations. She believes she is descended from an evil woman who turned into a panther when she was sexually aroused and killed her lover. She is afraid of privacy and that she will kill her husband.

It’s a movie with a surprisingly sexual touch for 1943. With Val Lewton’s films, the viewer usually doesn’t see a real monster, so there’s no one running around in a cat costume. Horror in The cat people is more psychological, with terrors kept in the shade and not explicit. There is a discomfort in the wait for the film, with the horrors still just off-screen.

Dorian Gray is a handsome young man, highly regarded for his looks and purity. While having his portrait painted, he meets the waster, Lord Henry Wotton. Lord Henry corrupts Dorian by telling him to seek only pleasure in life. As he gives in to corruption, Dorian finds his entourage aging, but he never does, retaining his youth. He gradually realizes that his portrait has taken all the dirt that his life has become and that he has lost his soul.

Dorian Gray’s photo is Oscar Wilde’s classic tale about a young man’s corruption and the cruel legacy it leaves in its wake. George Sanders is awesome here, playing an even more explicit version of his usual cad. Angela Lansbury plays Dorian’s wife, whom he drives to kill himself, and her performance is heartbreaking. This is Hurd Hatfield’s second movie and he’s pretty good and getting better the more he gets villainous.

Mary Gibson is forced to leave her school when her sister goes missing. Traveling to New York to search for her, she discovers that her sister was involved in a satanic cult that is now pursuing her for exposing them.

It’s a sinister thriller with a surprising satanic bent for a 1940s film. The seventh victim is more of a film noir than a true horror and has an intensely creepy feel to it. The cult featured here is made even more disturbing by their calm and reasonable appearance. The viewer and the main character only slowly realize what’s going on, and then it’s too late.

Death of the night revolves around a group of guests who are invited to an English mansion. An architect has been commissioned to review the proposed renovations but appears to know all of the mansion’s guests, even if they have never met, and he can also predict what will happen next. The guests each tell a story of supernatural horror.

The following are five guest-told terror stories, the most famous of which, “The Ventriloquist’s Dummy”. It stars Michael Redgrave as a ventriloquist convinced his model may be alive. The ultimate revelation of The Architect’s Nightmare is chilling and innovative at the time, proving to be very influential in subsequent British horror.

Betsy, a young nurse, comes to the West Indies to help a plantation manager take care of his wife, Jessica. Jessica had had a fever and is now in a trance state that no one can get her out of. Even though she fell in love with Paul, Betsy is determined to get Jessica out of her trance, even though she has to use “voodoo” to do so.

RELATED: 10 More Universal Monsters That Should Be The Subject Of A Horror Reboot

I walked with a zombie is another from producer Val Lewton, located in the West Indies, and he has been called the zombie Jane eyre for its intrigue in love triangle. Despite a lot of elements of the movie that don’t age well, the movie is really weird, with a really scary zombie. There’s even a folk singer sister who shows up to sing a menacing song to the main character.

Dr Wolfe MacFarlane ran a medical school in Edinburgh in 1831. The school is doing well except for one thing, it lacks the body for dissection. He hires a resurrectionist, John Gray, to provide him with corpses. When Gray has no more freshly killed dead, he makes his own.

The story of Burke and Hare is famous, and here they are combined into a character played by the best Frankenstein, Boris Karloff. Karloff is awesome, as a snickering and arrogant cab driver / body thief with a grip on the doctor, and Bels Lugosi is also very good as a dark assistant to the doctor, Joseph.

Tom Stewart is an actor, playwright, and writer living in Seattle, WA.

The new Nicolas Cage, the classic Peter Jackson among the highlights of the Terror-Fi Film Festival