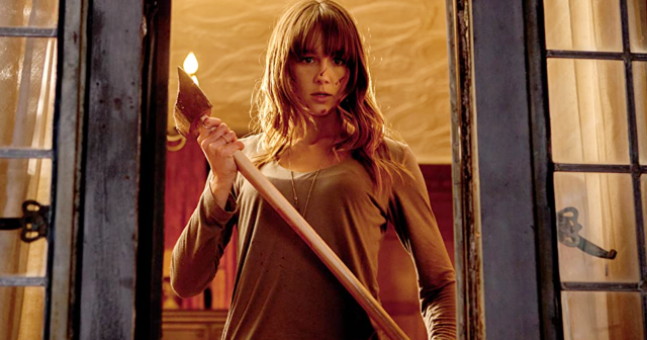 Next in your movie queue…

It’s Monday, so you know what that means.

a list of the most interesting movie options to watch on the box, of course!

Fantasy film that serves as both a prequel and Sequel to Snow White and the Huntsman.

He doesn’t do an Irish accent in this one, unfortunately.

2011’s You’re Next is as clever and comical as it is brutal and relentless.

When a family reunion escalates from tense arguments to an actual violent home invasion murder, everyone involved finds themselves prey to a group of masked killers.

However, one of the party members happens to have survival skills in his locker.

Director Adam Wingard would go for the likes of The Guest (excellent), Blair Witch (extremely disappointing), Death Note (horrible) and Godzilla vs Kong (uh?) but this one still cuts like a particularly sharp knife.

Brad Pitt leads a squadron of soldiers on a dangerous mission during the final days of World War II.

We’re still upset they didn’t call it TANK: THE MOVIE, but it’s worth watching, nonetheless…

Dirty stuff and no error.

How to Lose Friends and Alienate People – Film4 – 1h20

Based on Toby Young’s book of the same name, a deeply unsympathetic Simon Pegg does his best to become a successful journalist and break into America in the process.

Is San Antonio FloatMe a Safer Alternative to Payday Loans?