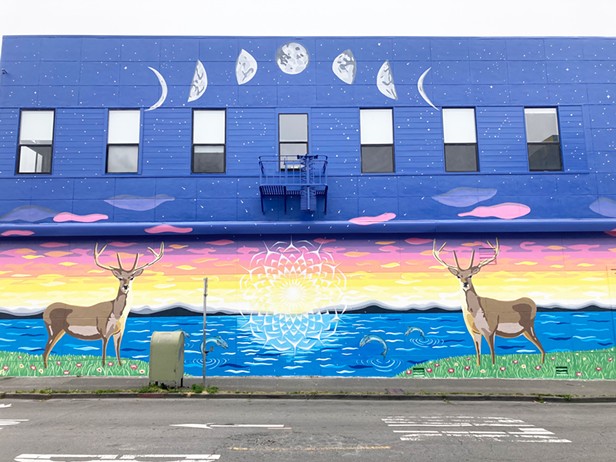 If you’ve spent any time in Arcata lately, you’ll have noticed a lot of changes, many of which there’s no shortage of among the citizens. I’m talking about new construction and roadwork, and one of my own personal gripes: address plaques with digital fonts that conjure up visions of tony SoCal neighborhoods here in Alaska California. One addition to the city that should be indisputable and welcomed by the polis is the rapid expansion of public art, notably murals – but without an accompanying festival like in Eureka (“Murals Under the Bridge”, August 11 2022). From basketball courts to cafes, colors and images are popping up everywhere across 95521, with the scuttlebutt saying more art is coming down the pipeline. That’s probably a good thing, even if the quality or content of some tracks turn out to be bad. I say this because, like many people out there, I secretly enjoy a horror, being born with the genetic American urge to gawk at the big glowing thing. I like a show.

One sunny day in June, I was walking down I Street, staring at the strange wall gnomes in a muted state of horror when a sight (not a horror, though) caught my eye. Just up 10th Street, across from the Minor Theater, a woman on a mechanical elevator was painting a large mural on the side of Global Village Gallery.

Tamar Atik was born in Israel 36 years ago and grew up in England. She describes herself as a nomad, having spent 11 years in Mexico and Guatemala, and a self-taught painter who became a professional artist four years ago. A course in Italy and a year of study in Mexico followed, and she painted murals in Mexico and Guatemala before inaugurating her piece in Arcata. Titled “Honor the Land”, it is the largest mural she has ever painted.

“A friend of mine owns the Global Village Gallery. I spotted the wall and wanted to paint a mural. He was enthusiastic, as was the owner of the building, but there was no funding, so I began to research what I should do.” she says.

What happened next was a journey through the bureaucracy of realizing an artistic vision. Atik discovered that a permit was needed, and with it the need for insurance, which was “expensive”. With no sponsorship or funding, word of mouth directed her to the Eureka-based non-profit organization The Ink People and its Dream Maker program supporting local creative projects.

“I applied for this program and presented my project to the board and I was accepted. This meant that I would fundraise through them, and they would cover my insurance costs, and that 15% money that I would have collected would go back to them”, explains Atik. , which describes the organization as helpful and supportive. “I’m also happy to donate a portion of the fundraiser to them, as they do such fantastic work for creatives in the community.” Funding secured, Atik set to work prepping and painting the area she had eyed.

Starting May 30, she got five days of help washing, priming and painting the dark blue backdrop. “So I was very grateful for this help, because it’s a huge job! We had a scissor lift paid for by the owners of the building – the lift saved so much time and I will definitely have one again for my next big project,” says Atik. . To get the two coats she needed in the two weeks she would have the lift, she worked top to bottom. “I first drew the sky and the moons, then the clouds and the sunset. Then I drew the deer and painted them. For the mandala in the middle, I used a giant compass to draw it.”

Atik notes that although labor intensive, the project was extremely rewarding and fun, and the public was very friendly and helpful, with Hensel’s Ace Hardware donating the paint and materials and the Rental Guys at Eureka. offering extra days of use on the scissor lift for free. “The fact that this is a community-funded mural also makes it more special, and people have been coming and talking all day. Everyone seems to really like it and I think that makes people happy people.”

Although Atik completed the project in July, she will paint an additional connecting mural on another part of the building. She says she hopes for more projects in the future and wants to make herself available as an artist to the people of Arcata and beyond. “I think public art is so important. It can really change the mood of a place,” she says. “I strongly believe in brightening up and beautifying community spaces and making art accessible to all. Murals have the power to have such an impact, to inspire and to send messages of hope, of positivity and empowerment. I really want to continue painting and bringing more art to communities around the world.”

Like I said before, I love the show and it really takes courage to stand up and create one on the side of a public facade. Atik’s mural is technically challenging, bright and beautiful. I hope Tamar and others like her continue for the sake of the rest of us.

Collin Yeo (he/him) lives in Arcata, where his only contribution to public art was things that probably should have gotten him quit as a teenager.

Public sector workers are skipping meals, taking out loans and struggling to sleep due to the cost of living crisis