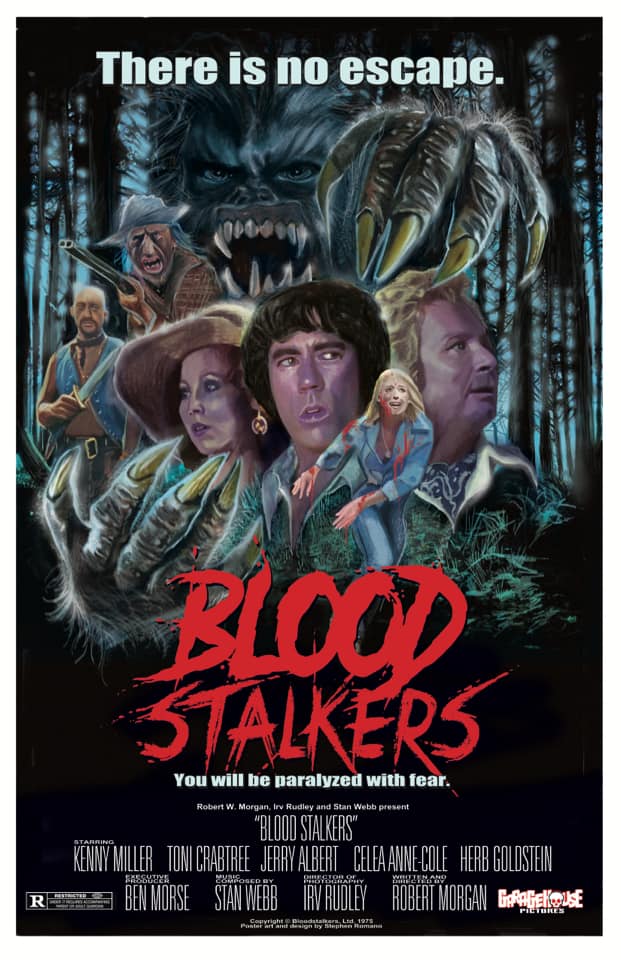 “This movie will scare you”

Bloodstalkers is a 1976 American horror film about two urban couples who go on vacation to a cabin in the Florida Everglades. Also known as The night Daniel died

Written and directed by Robert W. Morgan (screenwriter for The jaws of death). Produced by Ben Morse.

“Tension is deflated by an outdated TV movie soundtrack, dull direction by former 1950s DJ Bob Morgan and endless padding. But when that crescendo knocks you out, the disorientation is so colossal that nothing else matters. Bleeding skull!

“As predictable as it may be, everything works perfectly. The tension mounts and in the end the blood flows like a dream come true. Bloodstalkers stay out of sight until the final attack. We’re getting just enough glimpses and clues of what’s scaring the crap out of our happy campers. Buried.com

“It’s a long, long time before the killings start, and we’re spending that time watching the Yankees kissing and bathing and being idiots. […] while I see what Morgan was trying to do by adding a unique audiovisual twist to an outdated genre, there’s ultimately nothing here that makes up for the utter monotony of the first hour. DVD Talk

“Eventually the film develops a sort of nauseating tension because things get ultra-violent […] None of this makes much sense, but it’s hard to look away from the bizarre scenes featuring slow-motion chases and cuts to gospel singers. (Don’t ask.) And while Bigfoot’s on-screen stuff is a little teasing, the off-screen connection to Sasquatch lore is real. All movies from the 70s

“It’s only when the monsters attack that the film really comes into its own, and it’s at its best when it’s at its most ambitious; in particular, the climax of the night attack sequence is very impressive, with masterful editing and great use of music. It’s good that this part works so well…” Thoughts and ramblings on fantastic films

“Unfortunately, the budget didn’t seem to extend to adequate lighting for night scenes. […] However, the film occasionally transcends its boundaries, notably during a climactic scene where footage of a ravishing gospel choir is intercut with a mad dash to safety for one character and the oddly chilling disappearance of several others. … » Hysteria lives!

“…ideas usurped from other films have simply been shamefully woven into a shitty tapestry through which a few all-too-brief moments of original light shine.” Lost Video Archive

“Florida horror movie fans will especially enjoy this one because it has the same bright, arrogant atmosphere found in William Grefé’s films. It’s a pretty slow burn in the front streak because we lots of couple chatter and ominous warnings, but the film creates a strong atmosphere and climaxes…” Digital Mondo

” …beyond the very reduced budget and the wobbly editing, it’s not a bad production. The actors generally do well, and the script has a few fun twists that work if you feel like it, or just underwhelming if you’re in that mood. Robert W. Morgan has enough balls not to show us what would probably have been the most violent scene…” Ninja Dixon

“…once we hit the halfway mark, all bets are off and this one goes from hokey and comedic to dark and twisty. Morgan and company are really picking up the pace as the final approaches […] the film has some big surprises in store for the audience, one of which (we’ll just call it the church scene so we don’t spoil it) is genuinely heartbreaking and touching. Oscillate! Shock! Pop!

“This low-budget regional horror film is big on talk and lacks horror. To add insult to injury, the murders of the main characters happen off-screen. At least the villains’ reward is shown in all gory detail. This brief climax, unfortunately, comes at the very end, and it’s not really worth the wait, but it does at least save it from being a total washout. The video vacuum

“…once the movie starts to pick up speed and the main threat is revealed, Bloodstalkers turns out to be a pretty good little horror movie. It’s hard to stay mad at the film’s slow and labored first half when it ends in such glorious fashion. […] in its final act, it puts on a damn good show. You died of dysentery

Kim [Toni Crabtree] “Well, I can tell you everything. I spent my very last night in the Everglades.

Bloodstalkers was released on Blu-ray by GarageHouse Pictures on January 10, 2020. Special Features:

Writer-director Robert W. Morgan was also a Bigfoot enthusiast. He claimed to have first encountered Sasquatch in March 1957, and became involved in full-time research on Bigfoot in 1969. He later went on numerous expeditions to find Sasquatch and appeared in films. Bigfoot: man or beast? (1972), M.onsters! Mysteries or Myths? (1974), The Mysterious Monsters (1975) and Searching for Bigfoot (1976).

Some admirers of Bloodstalkers apparently let their predilection for the trash of a bygone era cloud their critical judgment. Aside from a few mildly amusing moments in the first hour, the film is largely a turgid affair with too many poorly lit night scenes.

Worse still, some gospel singing shots staged in church are jarringly juxtaposed with the on-screen mayhem (which just negates the effect of the latter). The fleeting splatter deaths glimpsed during the finale don’t make up for the film’s extended buildup or its slightly overlong runtime.

Donate to MOVIES and MANIA

MOVIES and MANIA is a truly independent website and relies solely on very low revenue from affiliate links and internet advertisements to stay online and grow. As an Amazon Associate, the owner earns a small amount on qualifying purchases. Please support the site by not blocking ads. If you’re ad-blocking, consider making a small direct donation for the costs of maintaining and running the site instead. Thank you. It’s really appreciated.