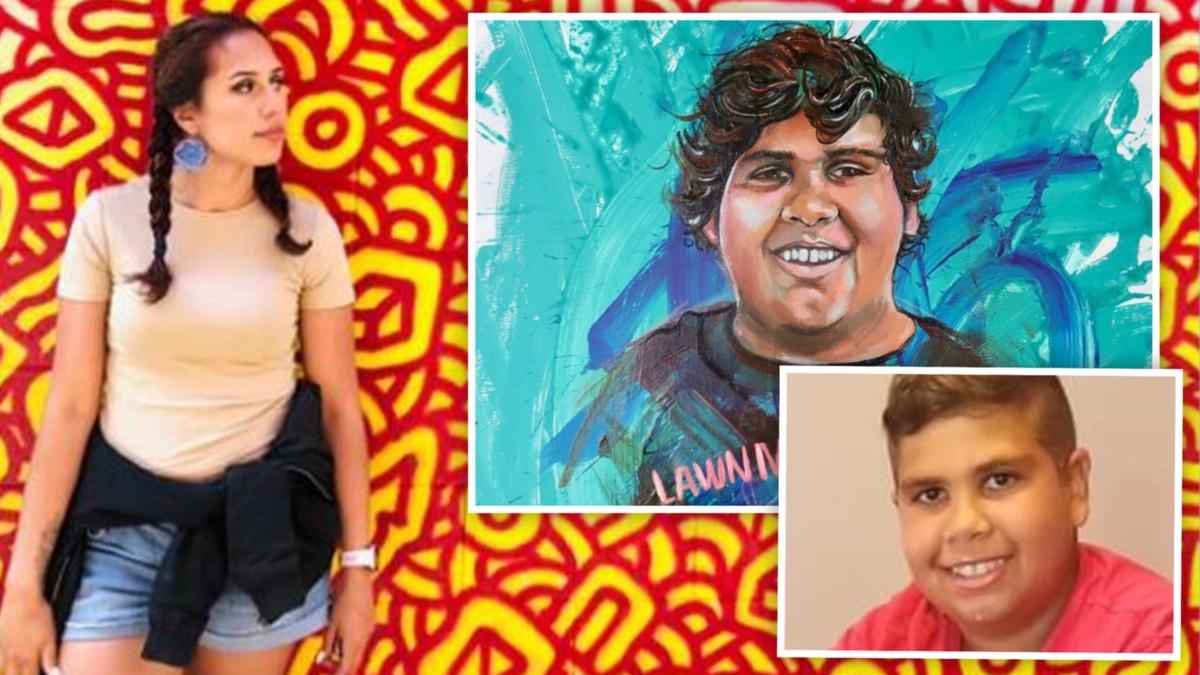 The attack has struck home for Tasmania-based Wiradjuri and Tongan artist, who likes to call herself “Tongariginal”. His heartbreaking first thought was that the alleged brutal attack could have happened to someone close to him.

The 15-year-old boy from Noongar Yamatji was allegedly hit with a metal pole as he walked home from school in Middle Swan with friends on October 13.

Cassius’ family believe he and his friends were mistakenly targeted in an act of vigilance over a damaged car and claim the teens were racially abused in the moments before.

The horror attack left Cassius with severe head injuries which resulted in convulsions, two strokes and his ultimate death 10 days later on October 23.

“As a proud Wiradjuri woman, it was extremely difficult for me to understand that an indigenous child could be [allegedly] murdered, in broad daylight, walking home from school,” Salmon told PerthNow.

As an artist, she decided to pour out her feelings in a portrait of Cassius, which has since been shared hundreds of times on social media as people demand justice for the teenager, with many calling the attack ” racial motivation”.

“I decided to paint Cassius because I was deeply marked by his [alleged] murder,” she said.

“Cassius looked like my nephew, they’re the same age, and that really touched me; it could have happened to my nephew.

Salmon – well known for her striking portraits of Indigenous women in The Aunty Collection – said she also painted Cassius because she wanted people to see him for “the innocent child with hopes and dreams” that he painted. he was and “not a faceless statistic.”

“I wanted to raise awareness about the racism that Indigenous people face in this country,” she said.

“I wanted to celebrate the life of Cassius Turvey.”

Although Salmon does not know the Turvey family personally, she painted the portrait and shared it on social media with their permission.

“I heard from one of Cassius’ family members that his mother, Mechelle, ‘loves’ painting, and it made her smile,” she said, adding that hearing that ” was unbelievable”.

Salmon said she would send the painting to Mechelle, and she “hopes it can help her heal in some way.”

The painting was shared on Salmon’s Instagram page on October 30 with the caption: “His name was Cassius Turvey, he was 15, his favorite color was blue and he ran a lawn mowing business with his friends.

“Fly high into the Dreamtime, Cassius.”

“I laid down a base of acrylic paints and painted Cassius with oil paints,” Salmon explained.

Since sharing her painting, Salmon, who grew up in Victoria and graduated with a Bachelor of Creative Arts from Deakin University in 2020, said she was “incredibly moved” by the response.

“I was inspired by their stories and their strength,” she said.

Salmon then moved to Tasmania in the country of Palawa in February 2020 to focus on her art and is currently based near Hobart.

“I didn’t think my painting of Cassius would have such an impact and I’m just glad it resonated with so many people and raised awareness,” she said.

“I hope the painting and life of Cassius inspires people, especially the allies, to rise up! Rise! To arrive! Do more than just share the painting on social media and change a profile picture to black.

The final court appearance for Jack Brearley – the man charged with Cassius’s murder – came and went in seconds today. Brearley did not even appear on a video link at Stirling Gardens Magistrates’ Court, after lawyers for both sides consented to the case being adjourned until January. His next court appearance on the murder charge will be on January 18.

Aboriginal leaders condemned the alleged “cowardly and racist act against an innocent child” and urged the authorities to heed their concerns.

Rallies and vigils have been held in all capitals, as well as regional towns, over the past week, and more than 24,000 people have now signed an online petition calling for justice.

Last Wednesday, thousands of supporters of the Turvey family gathered at the Forrest Chase rally. It was the third rally in Perth in a week to honor the teenager, with the size of the crowd – and their anger and sadness at the senseless murder of Cassius – intact.

Friends and family shared their treasured memories of Cassius, including his entrepreneurial skills – mowing 15 local lawns with his friends on the very first day they tried his pay-within-your-means business – while the cousin Jasmine Rivers recalled his goofy smile, describing him as “really a beautiful old soul”.

Cassius’ family are preparing to hold a private funeral for the 15-year-old next week. Via social media, his family said the service would be broadcast live.

For Salmon, the ultimate reason for putting the brush to the canvas was to keep Cassius alive in people’s hearts and minds.

“I hope my painting reminds people that Cassius Turvey was here,” she said.