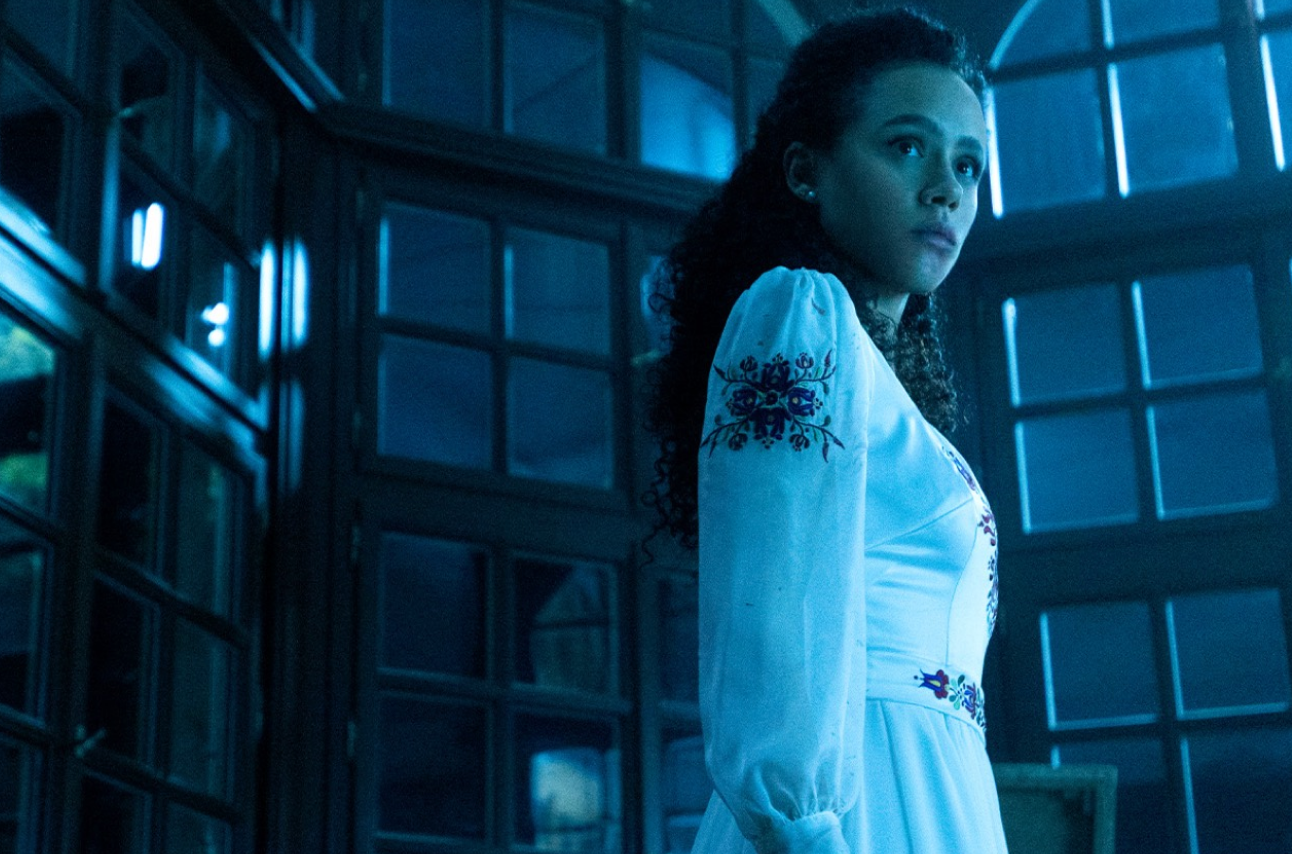 The sleek and clever gothic romance reframes the archetypal Bride of Dracula through the modern lens of horror, with an eye to deconstructing ancient global power structures associated with vampirism and colonialism. When Evie (Nathalie Emmanuel), a young artist living in New York, discovers a large extended family through a DNA test, she travels to England to meet them, despite the reservations of her best friend Grace (Courtney Taylor). Once there, she develops a romance with a mysterious, wealthy family friend, Walt (Thomas Doherty). But her fairytale vacation soon turns into a nightmare when she uncovers a startling conspiracy woven from blood and old money.

I spoke to director Jessica M. Thompson yesterday, and she told me that she always imagined you as Evie. I’m curious to know what attracted you to the project.

Well, I was very excited to do a horror play. I’ve always wanted to try my hand at any new genre or storytelling style, so at first I was just excited by the prospect. Next, I think I loved the idea of ​​telling a Dracula story from a female perspective. I just thought that was really cool! I connected to Evie in many ways, just living this creative life and this hustle and bustle and – you know, I haven’t always been an active player – wanting to pursue your dreams but not necessarily having the means to do so. His whole story, his whole journey in this room is something I can really relate to – discovering and realizing the strength you had all along and using it, being a survivor, being a fighter. I liked that about her. I also had my own fights. I had a very strong connection with her and with this story.

Are you a horror fan in general?

Yeah, I mean, I wouldn’t call myself a scholar. You know how sometimes you talk to horror fans, and they almost sound like they can teach a class about it, eras and styles? But I really like horror and its storytelling style. I like this idea of ​​being engaged in the play, watching, trying to figure out what’s going to happen and when it’s going to happen. It’s almost like playing detective, which adds to the excitement and fun. I’m a big fan of this experience. Once you get past the blood and gore, the psychological element, when is it going to scare me? When is this going to happen? “I really appreciate that.

Do you remember your first encounter with Dracula?

No I do not know. I do not know why. I think I’ve always heard of Dracula. Maybe we read it in school? I do not remember. It’s just a story that I know so well.

Are there any particular horror movies you grew up watching?

I saw it again recently and thought it was fantastic. It’s so funny because I stumbled across it and watched it again and then I started googling it and looking for things about it. It became kind of a cult classic, and it’s got a real following now, but back then it wasn’t necessarily viewed in the same way. It seemed relevant, especially for this movie, written by women, directed by women, starring women. It’s a horror [film] focused on young women. The idea is that when it came out, it wasn’t taken particularly seriously due to the under-representation of female voices in that genre. It made me very proud that we made a film written by women, directed by women, starring women, albeit many years later. I thought it was a very smart, funny and scary movie. Jennifer’s body is a lot smarter than maybe people thought at the time.

Absolutely. One of the things that Jessica talked to me about was how the storyline evolved once you came on board and you, Courtney Taylor, and Jessica discussed the authenticity of your characters’ voices as as black women face these white power structures. As a black film journalist, I really enjoyed that. Could you tell us what some of those discussions entailed?

I think first thing is first, this stranger on the internet who happens to be a really rich white guy is like, ‘Come here to meet me. We will be strangers,” and that is kind of the reality. You have to protect yourself in spaces that are not for you. This is the daily reality of minorities, blacks and women. Automatically, we kind of had conversations about how our blackness, our femininity, how it all intersects in these power structures, like you said. I think what’s great is the chemistry that Courtney and I had, and how we had dialogue around some of these issues that we could bring to our characters, we could bring that into our friendship and to the screen. I think that was really helpful.

Even the little moments, you know, being a mixed race person, I’m like oh yeah! There’s a scene in the movie where she asks, “How’s the family?” and I’m like, “Very white,” and she’s like, “Oh, you fit in well then.” [laughs]. It’s like bantering between friends in a way that talks about something, but also, it’s like they’re real friends. There was a freedom to discuss these things in a way that was really genuine and fun to do because Courtney is amazing. This woman is a star, I tell you. I’m so excited for her because she’s brilliant and I loved watching her travel. We were also fast friends. It was really funny, it turned out that she came in at the start of filming and we immediately had such good chemistry. Then the filming schedule kind of changed and she did most of her filming when filming was over, but we stayed in touch all the time, so when she came back it was like we were friends for a long time. We had so much fun together and I love it.

It’s awesome. Women have always been powerful characters in horror, although in terms of Dracula adaptations, they largely focused on the men in front of and behind the camera. Having women in the role of director, writer, cinematographer and lead, what did that give you a chance to explore that you might not have had otherwise?

I think we’re so often used to seeing women in horror being damsels in distress, and there’s this generation of movies where the women are really their own heroes. They really have to save themselves. I think what is fantastic in the Dracula The story is specifically a lot of the Dracula and vampire rules or mythology is very patriarchal, very power driven. And when you interact that with a modern woman, it immediately creates electricity. In our film, you see it from the perspective of a woman interacting with someone and with a structure that doesn’t want her to be who she is. This challenge through some of these traditional or archaic values ​​through the lens of a vampire story isn’t necessarily something we’ve seen in the movies before.

You’ve done a lot of different genres as an actor, from fantasy to action to horror. Is there a particular favorite you have?

It’s hard because I think I really learn so much from every job I do and every acting role I do, and the skills that you learn or have to adopt for each thing are still very valuable. I think I like the action stuff because I like being physical, and I have a dance background so doing the choreography is really fun. But I also love that style of storytelling and horror, the kind of planting seeds, the slow burning plot points and twists. I think the psychological element is always a lot of fun to trade. I don’t know if I have a favorite because there are so many things I love about each one.

Is horror something you want to do more in the future?

Yeah absolutely! Although I’d be happy not to be put in a coffin [laughs].

This interview has been edited for length and clarity.

The invite is now in theaters. Check out our interview with The invite director Jessica M. Thompson.