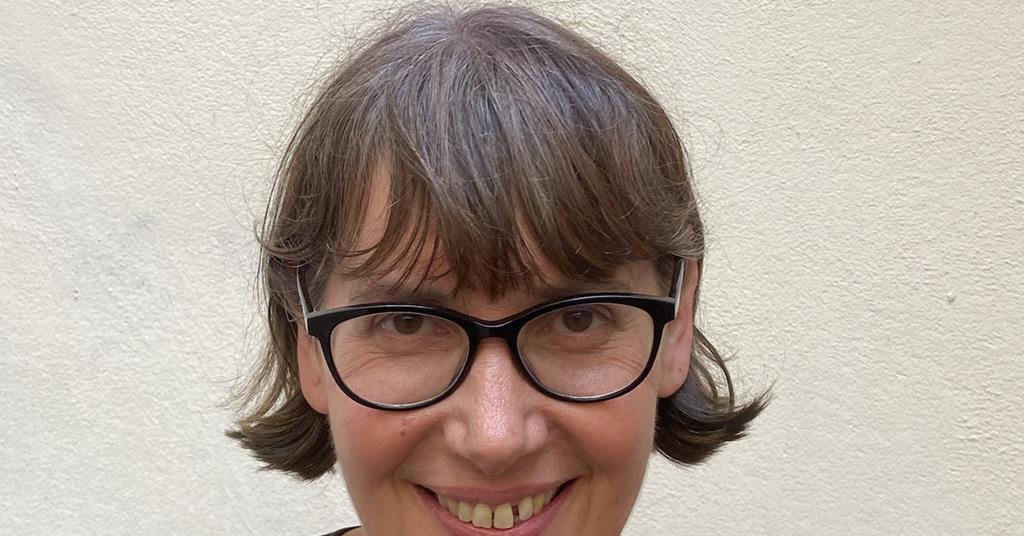 French director Lucile Hadzihalilovic is back at the San Sebastian International Film Festival this weekend for the European premiere of her third feature film and first in English Ear piercing in Official Selection.

She has a long relationship with the festival where she won the award for best new director in 2004 for her first feature film. Innocence and the special jury prize for Evolution in 2015.

Located “somewhere in Europe, mid-20th century”, Ear piercing stars Paul Hilton as a man named Albert, who is employed to look after a young girl, living in near isolation in a maze-like, sparsely furnished apartment. His main task is to change the ice prostheses of his young load, which he prepares daily by freezing his saliva in custom molds.

A kaleidoscope of other characters comes in and out of focus. Romola Garai plays a bartender Albert accidentally disfigures in a fight, Alex Lawther is an enigmatic and well-heeled suitor who comes to her rescue, and Peter Van den Begin is a mysterious stranger who offers clues to Albert’s past.

Notice for Ear piercing from Toronto, where it premiered in the Platform section, suggest that the film’s dreamlike-slash-nightmare structure left critics perplexed as to the script. For Hadzihalilovic, this is a sign that she has achieved one of her key ambitions.

â€œThis is deliberately the logic of a dream or a nightmare. It’s not supposed to be rational, â€she explains. â€œIt is the portrait of a man who has repressed a painful past, perhaps shameful for him. He’s caught between his memories, his dreams, his nightmares and his hallucinations and of course the movie doesn’t say what’s true and what’s not true.

â€œThe idea is to be in Albert’s head. He is confused about what he thinks and feels. I wanted to put the viewer in the same position. I think I managed from this point of view to capture the fog in Albert’s mind, although I may have exaggerated in leading the viewer down this path because Albert is truly lost, and never finds his path.

Hadzihalilovic rejects labels such as “horror”, “bodily horror” or “genre” which punctuate many criticisms.

â€œI don’t know what is meant by ‘horror’ or ‘genre’. I’m glad you called it an emotional drama. Maybe it’s because the film isn’t realistic or naturalistic, but rather takes place in a fantasy fantasy world, â€she says. â€œI like the fact that there are acts of violence whereas in my previous films it was implied. I imagine that the tension, the fantasy and the atmosphere of dread get people to talk about horror, but I don’t see it as a horror movie specifically. Horror is one way to put a label on it, but it’s more of a “fear movie” than a horror movie.

She adds that Ear piercing perhaps follows in the footsteps of “a form of poetic horror” embodied in the 1960 French classic Faceless eyes by Georges Franju, about a surgeon who goes to the extreme to give a new face to his disfigured daughter.

“I think I belong more to this universe even if this film has a more realistic dimension than Ear piercing. Ear piercing has more of a fairytale feel with this little ice-toothed girl, â€she suggests.

Ear piercing is adapted from the novel of the same name by British sculptor and multidisciplinary artist Brian Catling. British screenwriter Geoff Cox, who previously collaborated with Hadzihalilovic on Evolution, introduced him to the novel before its publication.

â€œHe’s a friend of Brian Catling’s and Brian made him read the unpublished manuscript. Geoff immediately felt: “It’s perfect for Lucile,” said Hadzihalilovic. “There were a lot of things about the novel that got me excited about doing an adaptation, starting with the fact that there are a lot of aspects left open for interpretation, although more is being done. explained in the novel.

The Anglo-French-Belgian co-production is directed by Andy Starke at Anti-Worlds and Jean des ForÃªts and AmÃ©lie Jacques at Petit Film in Paris and supported by BFI and Film4. The co-producers are Jean-Yves Roubin and Cassandra Warnauts at Frakas Productions.

The UK’s involvement arose out of meetings with Starke and BFI editor-in-chief Lizzie Francke in London when Evolution screened at the London Film Festival in 2015.

â€œAndy told me that he liked my films and that if I ever had a project to do in English, he would be interested in getting involved,â€ says Hadzihalilovic. â€œI also met Lizzie Francke, who told me the door was open. When Geoff contacted me about Brian’s novel, I felt it was a story the English would understand better than the French.

While working with British producers and financiers was a positive experience that Hadzihalilovic would repeat again, there was a period of stress in late 2020 when the Covid-19 pandemic combined with Brexit threatened to shut down production indefinitely.

â€œWe were supposed to shoot in the spring, but the pandemic pushed it back. It was absolutely necessary to shoot before Brexit came into effect [from January 1, 2021], otherwise we risked losing all Belgian finance. There, we would be dead, â€says Hadzihalilovic.

Ultimately, production started rolling at the eleventh hour in the Belgian cities of Brussels and LiÃ¨ge in November 2020, just as a new wave of coronavirus swept across Europe, causing further lockdowns in its wake. .

â€œWe were supposed to shoot in Poland but it was not possible because of Covid. We looked for sets in Belgium that were not too Belgian because the film does not necessarily take place in Belgium, even if the novel is, â€explains Hadzihalilovic, who was looking for a more central / eastern atmosphere.

Belgium announced a nationwide lockdown on November 2, although production was able to continue. It did not have a negative impact on the mood on set or the atmosphere of the film.

â€œIt was a bit complicated but we had no problem with people who got sick,â€ says Hadzihalilovic. â€œWe have had a few positive cases but fortunately not in any of the key positions. The emptiness outside was a little strange, but I think it gave us extra strength and a sense of joy about how lucky we were to be together to make the movie.

The next stop for Ear piercing after San Sebastian will be the BFI London Film Festival (6-17 October) where it will be screened in the Dare section.