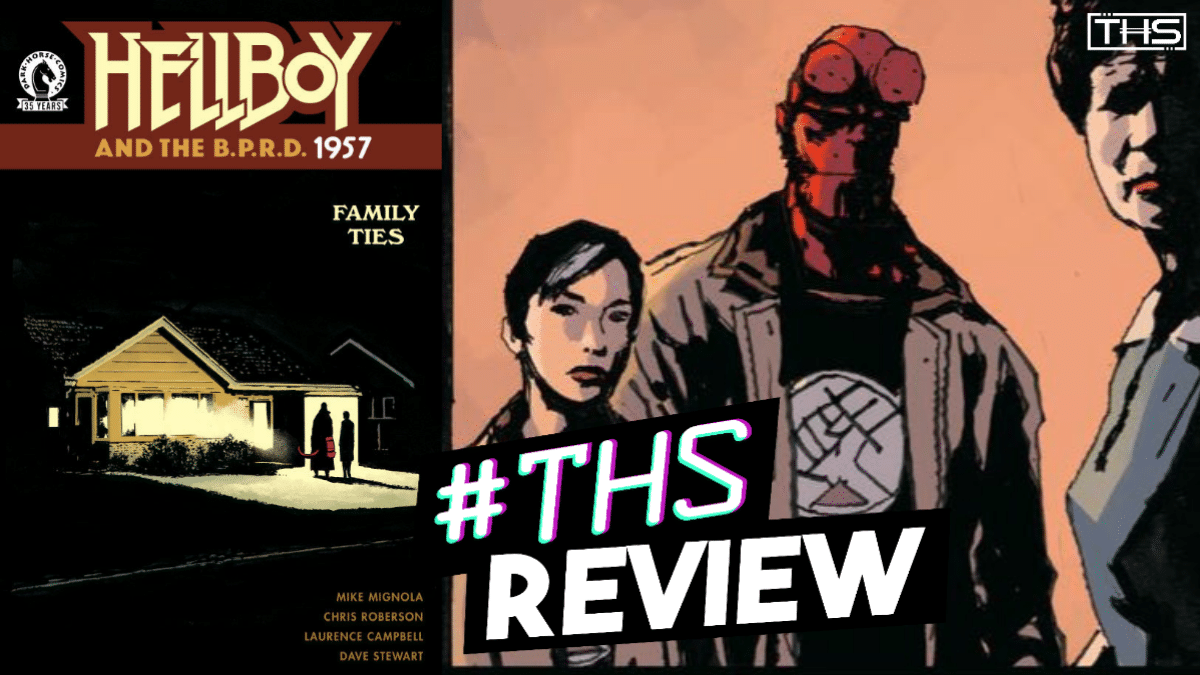 Hellboy and the BPRD: 1957 – Family Ties gives us a darker look at 1950s America in this side story of the Hellboy universe. In particular, a housewife and the abusive mother she could do without.

Hellboy original creator Mike Mignola and Chris Roberson are the writers of Hellboy and the BPRD: 1957 – Family Ties. Laurence Campbell is the artist, with Dave Stewart as colorist and Clem Robins as letterer. Laurence Campbell and Dave Stewart are also responsible for the main cover art. Which is also the only cover. There are no variations of blankets here to admire. Oh, and Dark Horse Comics is the publisher of this one-shot comic.

Hellboy and the BPRD: 1957 – Family Ties will go on sale September 15, 2021. You can purchase printed copies at your local comic book store. Or, if the digital version is fine for you, you can download it directly from Black horse comics.

Warning: spoilers for Hellboy and the BPRD: 1957 – Family Ties below. If you want to discover this parallel story at a glance Hellboy universe for yourself, stop here and return after the demonic screams are over.

This side story stars the titular Hellboy and his fellow BPRD agent Susan Xiang in 1957 in Ohio, United States. Their mission for today? Find and collect a paperback on witchcraft and demonology that a silly publisher decided to reprint before it did any harm. What harm, you will ask me? Well, remember this is a setting where the magic is real. As Hellboy himself puts it, “It’s like giving a kid a stick of dynamite and a box of matches. Something is doomed to explode.

Their investigation leads them to a normal-looking suburban house, where a very scared housewife greets them, while lying to someone else inside about who our BPRD duo really is. The housewife, a Mrs. Gladys Stemple, moved in with her mother harpy and it was hard enough for her, but that’s not why she stopped our duo. Apparently the thing with her mother has gotten “strange”.

When our duo enter the house, the strangeness goes up several notches. The interior of the house is in ruins, with all furniture destroyed. Hellboy even stumbles upon the mutilated corpse of a… dog? Cat? It’s a little hard to say, but it bothers him anyway. He is also disturbed by the sight of a long mummified male corpse in the bathroom. The sight of a teenager with his mouth shut with the skin freaks him out even more, though the kid also receives Hellboy’s sympathy.

Hellboy finally confronts the demon in the basement of the house, with this copy of this book of witchcraft and demonology. Said demon seems to be fused with Gladys’ mother, both in body and in spirit. Susan reading Gladys ‘mind reveals that this is the result of the child using this book to innocently try to summon a demon, only for the demon to possess Gladys’ mother. Hellboy is in a bit of a mess, as he’s trying very hard not to hurt the old woman in the demon. Gladys comes to the rescue in the form of this same book, which contains a spell that drives out unwanted spirits, including demons. After Susan convinces her, as the head of the house, to do so, Gladys exorcises the demon.

Gladys finally finds the courage to ask her mother harpy to move out, and Hellboy and Susan finally get the damn book back. In short, a great working day for the BPRD It also marks the end of Hellboy and the BPRD: 1957 – Family Ties.

The story looks like a side quest from the main series. It’s short, but sweet. Or rather, short, but horrible. Exactly like a good Hellboy story should be. It’s an action-horror comic, after all. This little subplot with Gladys is a nice icing for this damn cake.

Laurence Campbell’s art also really nails the Hellboy see. It’s suitably dark and scary, suited to this universe. It’s also nice to see how the story begins with white borders when the duo are outside and changes to a black border as they enter the House of Horror. The borders do not turn white again until Gladys exorcises the demon. It’s a nice background touch there.

I feel like the only thing that’s really wrong with Hellboy and the BPRD: 1957 – Family Ties is the short length. Or rather, what looks like a short length. It’s a standalone story in one comic book issue. I realize that it will be short. I just wish it was a bit longer, that’s all.

Hellboy and the BPRD: 1957 – Family Ties is a beautiful comic parallel story for the Hellboy universe. It’s its own little one-issue story with more emphasis on horror than action, and a nice ending too. If you want to read this short story for yourself, check it out at Dark Horse Comics.