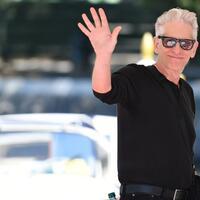 Canadian filmmaker David Cronenberg has shocked audiences for decades with his graphic “body horror” films, but now he’s gone a step further by creating art from his own interior.

‘Crimes of the Future’, in competition for the Palme d’Or at Cannes next month.

“My doctor said, ‘You know, I’d like to have your kidney stones so we can do a chemical analysis and see if there’s something in your diet that caused your body to create this,'” he said. the director to an online forum. of his fans.

He said he refused because the analysis would destroy the objects.

“I think they’re too beautiful to destroy,” he said, adding that he felt a “closeness” to them.

“After all, it’s quite intimate, it comes from inside my body.”

The image, called “Inner Beauty”, is being sold as a digital token (NFT) with a starting bid of the equivalent of around $30,000 needed to start a 24-hour auction. No one has yet agreed to pay this price.

The 79-year-old author has pushed the boundaries of taste and tested the patience of censors throughout a five-decade career that has been fixated on the idea of ​​humans as guinea pigs, transformed by technology and its environment.

But he told fans at a forum hosted by the NFT SuperRare marketplace that the inspiration for his kidney stone project came from his 1988 film “Dead Ringers,” in which Jeremy Irons played twin boys, both gynecologists.

“At one point, one of the twins said to the other, ‘I don’t understand why there aren’t beauty contests for the insides of bodies. The most beautiful spleen, the best kidney,” he said.

The artwork is also, he said, a reference to his new film, which stars Viggo Mortensen as a self-operating performance artist.

Cronenberg has dabbled in NFTs in the past, selling a one-minute movie called “The Death of David Cronenberg” for over $75,000 at today’s prices.

Burgeoning artist communities are trying to mine tokens as a way to spread their art, and some have sold for millions of dollars.

Janhvi Kapoor sets the internet on fire in a bridal look and looks dreamy in pink lehenga: PICS | News