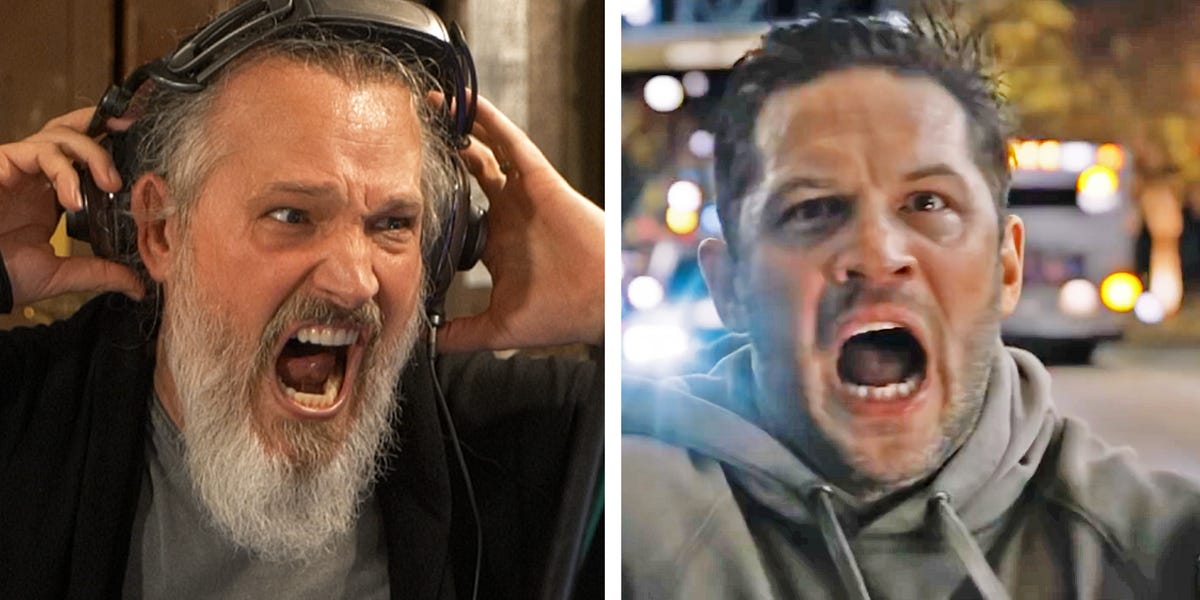 Here is a transcript of the video.

Narrator: That scream you hear right now from “Venom”? It’s not Tom Hardy.

Cree artists are some of Hollywood’s best-kept secrets. Like, actually secret.

She’s one of Hollywood’s most accomplished howler, but you might not know where to find her because productions don’t always want audiences to know their stars have been dubbed.

Narrator: This makes the actor’s emotion and voice all the more important.

Here’s how they get the perfect one …

I’m sure I blew you guys up.

Narrator: Many of the sounds captured on the set are not actually usable, so they have to be re-recorded later.

Peldon: The great background actors who were there on set that day probably weren’t microphones, or maybe there was too much going on in the noise. They’ll have wind machines and sound effects, or you’ll have the stuntman or director yelling at the actors.

Narrator: But when it comes to screaming, sound quality is just one factor. Screaming is physically difficult. Just watch this clip of Hugh Jackman dubbing some of his “Logan” noises.

So if an actor wants to keep their voice intact, these skilled recording artists can help them.

Why : You know, maybe I’m more expendable, because for a session price, I can breathe my voice.

Narrator: Peldon and Whyte first need to know what type of scream they are making, as it will impact their performance. One of the most common screams you’ll see in movies are scary screams, but they’re not exactly realistic.

Peldon: Now what’s interesting is that in real life most people are probably going to freeze and little of its plight, but it’s not as dramatic on screen. So we want to make sure it’s a loud, terrifying loud scream.

Narrator: Determining where the fear is coming from in the body can make the cry more believable. Peldon says the scared cries should be involuntary, even if they aren’t. So she works her diaphragm.

Peldon: You want it to be as messy as possible to make it look as realistic as possible. So like if you just hear a

you know, a really clear, short, or contained cry isn’t really that realistic for someone who’s very scared.

a sort of scream of sensation.

Narrator: You can see and hear this as Peldon watches an old horror clip.

Peldon: Where the tension is building, that’s what’s important there. This one for me would feel more of a fear

build some kind of cry rather than a

you know, a bloodcurdling scream.

Narrator: But what makes it scream …

sound different from this?

Peldon: Rage is the emotion of anger, isn’t it? So it is screaming with the intention of repressed emotions. You have to let him out.

Narrator: Cries that come from a place of anger call for a closed mouth and a tighter position of the body. And a more powerful cry of rage calls Peldon to open his mouth fully.

Whyte will do the same when recording War Cries for games like Call of Duty.

For the other roles, Peldon will channel the grief.

Peldon: So grief feels different because it’s pure pain, but not physical pain, right? It’s just emotional pain. I tend to think of this as the freest, most unbalanced kind of feeling.

Narrator: When synchronizing with a clip, it will often have to offer several options.

Narrator: Listen as she tries a shout with the word “no”.

Narrator: And one without.

Narrator: Hear all the pants and extra breaths Whyte adds to his screams during a fight scene from the Days Gone video game.

These wordless physical reactions are called straining, and they are crucial in combating screaming.

Narrator: Each breath and growl will have subtle differences depending on the type of distress their characters experience.

Why : A bullet in the guts would take your breath away, which is more of a

A punch to the face would be more of a quick hit, like

Narrator: While this effort …

fits nicely when White’s character kicks, this one …

[grunts] matches when he swings a machete.

All of these variations help keep the scene alive.

Why : All the energy when the camera is not on my character to keep this character in the background.

Narrator: But some cries do not fit perfectly into a category.

For example, in “The Incredibles 2”, Whyte must have created the cry of a pilot who was thrown from a helicopter.

Why : The fear of being pushed out of the helicopter, which then turns into anger, like “Ah! I shouldn’t have been kicked off that plane!” You know, or whatever. So it couldn’t be just a fear

and then you touch the water. There had to be a little number in two parts. And once you hit the water, you won’t hear the “ah!” You don’t hear the arc of the voice. It’s just

Narrator: This process gets even trickier when performers scream for a top actor, like Whyte did for Tom Hardy during the motorcycle chase in “Venom.” Whyte first had to study the actor’s voice to understand what makes it unique. So Tom Hardy has kind of gruff, kind of a lower voice. So I knew there had to be a little more notch in the voice.

Narrator: Then he did what’s called “the chase of the scene”, where he watches the footage from start to finish, adding all the shouting and straining as the scene progresses.

Why Cut to, now is when you breathe and don’t pass out. You feel a little dizzy, but you get through. Let’s come back to it.

And you can tell it’s a workout. A short scene of a few minutes, and I’m already sweating balls.

Narrator: After this break, Whyte searched for details. We are really trying to focus on the scream itself and analyze the scream.

Why : His mouth is closed and his teeth are visible. And so you have to scream between your teeth to match that performance.

Narrator: Then, when Hardy got off his motorbike, Whyte had to cry out for almost 10 seconds without losing Hardy’s voice imitation.

Why : The art of a long cry is to tighten your vocal cords just enough and release just enough air so that you can continue that cry for as long as people need it. When you do that, you kind of squeeze your stomach. While, once again, Tom Hardy’s voice is more gritty, lower. So you kind of have to get that gritty thing in your cry as you pinch your vocal cords and tighten your diaphragm just to get enough air out. Because if you push too much air, you’re going to run out of air.

Narrator: All of these screams, whether in fear, in rage, or in combat, will not have the same emotional impact until they have undergone a process of layering. These layers can include the actor’s real voice mixed with the dubbed voice and digital sounds. Layering is especially useful for non-human voices, like when Whyte performed the demon’s otherworldly cries from “The Conjuring: The Devil Made Me Do It”.

Here’s a demonstration of how a sound mixer can take Whyte’s raw screams and add effects to make them more powerful.

Hear these three elements combined in one scene.

Scary, right? Well, adding effects like reverb to create an echo and a rumble can make them even scarier.

You know, using what the human body can do, and then taking effects, putting everything in the crucible.

Narrator: These clips don’t seem as exciting, scary, or sad until some screaming artist’s work is added to them.

So what makes one of Peldon’s real screams …

sounds better than this one?

Peldon: I think what makes the difference between what looks like a generic scream that they might just get from their scream library and one that really matches the scene is what we see. The actor, the energy, the emotion.

My cry is not just a noise; it is a burst of actor.

Why : “Six cries, two seconds each, go. Give us options. And you’re like,

You know, then they’ll grab each of those files and use them all in different places in the game, so.

How the Black Christmas of 1974 changed the Slasher genre