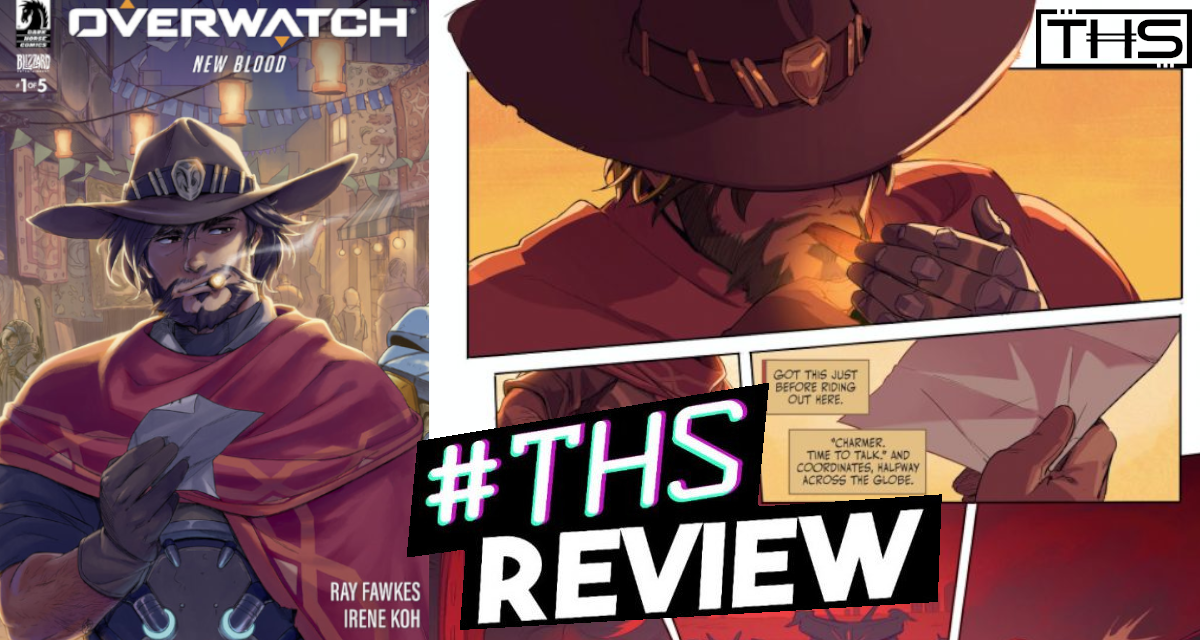 “Overwatch: New Blood #1” ~ The Man With The Cyborg Arm [Review]

Overwatch: New Blood #1 sometimes looks like a sci-fi western story. What else would you expect from a cowboy named Cassidy with a cyborg arm and a do-gooder attitude towards life?

Overwatch: New Blood #1 is a new 5-issue comic book series based on the team-based multiplayer first-person shooter video game Surveillance by Blizzard Entertainment. Ray Fawkes is the writer, with Irene Koh as the artist and Suzanne Geary as the colorist. Koh is also the main cover artist, with Dustin Nguyen responsible for the sole variant cover. Finally, Dark Horse Comics is responsible for publishing this comic book series.

Warning: spoilers for Overwatch: New Blood #1 below. If you want to experience Wild West-style shooting in a sci-fi world for yourself, stop here and return once the last canisters have stopped clinking on the sandy ground.

Overwatch: New Blood #1 introduces us to Cassidy: a US-based bounty hunter/mercenary with a heart of gold, a severe case of PTSD, and an apparent fetish for the Wild West look. Things change for him when he receives an unsigned letter requesting a meeting in Cairo, Egypt. Naturally, he accepts due to a keen curiosity. Once there, at the exact coordinates given in the letter, he finds Ana Amari: a former Overwatch operator, and apparently a close friend. They happily discuss the old days before the talks turn into modern conflicts. Unfortunately, the conversation quickly becomes very relevant when a group of Talon terrorists crash their party.

Cassidy and Ana show both their shooting skills and their close friendship with their synchronized teamwork as they take down the Talons. The engagement ends with their retreating to one of Ana’s underground hideouts. There, Ana hands Cassidy a thumb drive and a request to use the data on it to search the world for new heroes for a new Overwatch. Cassidy hesitantly agrees and sets out on her quest for new blood.

A few days later, Cassidy meets a potential recruit for the first time: Pharah. Luckily, it seems Pharah already knows Cassidy. Unfortunately, it seems that she is not happy to see him. Worse still, the preview for the next issue reveals that she apparently has a beef with her mother: Ana. Will mother and daughter work out their issues for the sake of world peace? Well, that’s probably what we’ll find out in Overwatch: New Blood #2.

Curiously, I like the work of Overwatch: New Blood #1 the best. Irene Koh’s art style is almost manga-like, which makes her visually appealing to me. As a longtime manga reader, I give the art in this Surveillance cartoon my approval. The only thing missing in my opinion is the manga effects, but I can easily overlook that.

The story isn’t too bad either. The story initially sounds like a traditional spaghetti western story about a lone wolf cowboy out to do good in the world, but it quickly deviates from it. Not in the latter sense of doing good. Rather, in that the story deconstructs the lone wolf archetype. We see in the Talon fight that Cassidy would have been in big trouble without Ana. Teamwork and friendship are clearly the message here. Even Cassidy’s mission to recruit new soldiers for Overwatch plays into this theme. It’s nice to see a Western (or at least Western-inspired) story going against the lonely cowboy stereotype here.

Plus, bonus points for Overwatch: New Blood #1 being a prequel to this animated short from Blizzard, in case you’re a fan of those shorts.

I think the biggest flaw of Overwatch: New Blood #1 that’s how much it depends on your knowledge of the game’s story to understand. If you don’t have at least a rudimentary understanding of Surveillance (for me, from the animated character shorts only) you’ll probably struggle to understand any good-sized chunks of this comic’s story. Then again, you probably won’t want to read this comic unless you’re already a Surveillance fan anyway, so it seems like it balances out there. And to be fair, Ray Fawkes tries to make the story more accessible to non-Surveillance Fans. It’s not very effective, but at least he tried.