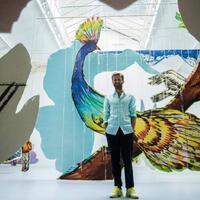 Petrit Halilaj knows something about how art can help lift children out of the horror of war, but also about the dangers of using it as a propaganda tool.

As a 13-year-old refugee from the Kosovo conflict in 1999, his felt-tip pen drawings of soldiers killing civilians were singled out by then-UN Secretary-General Kofi Annan as a powerful depiction of the impact of war on young minds.

Halilaj, now 36, has since become a successful artist and revisited these designs with a sweeping exhibition for Britain’s Tate and now at the kamel mennour gallery in Paris, separating his original images and exploding elements into huge facilities.

In the process, he tried to remember why he had finally refused to hand over the drawing he had prepared for Annan.

“At first I thought this was my chance to stop the war. I was rushing to finish a big drawing before it arrived,” Halilaj told AFP with a laugh.

It was, he thinks, his grandfather who dampened his excitement.

“My grandfather was almost annoyed by my enthusiasm, he couldn’t stand my joy of drawing. He told me [Annan’s visit] was just theater.

When Annan visited the camp in Albania, accompanied by media from around the world, and asked if he could bring the drawing to a big UN meeting, Halilaj said no.

“Maybe I was thinking about my grandfather’s words,” Halilaj said. “But maybe I just felt like it was my drawing and I wanted to keep it!”

Teenager Halilaj made the drawings under the supervision of an Italian child psychologist who was volunteering at the camp.

His experiences have obvious relevance as millions of children are once again forced to flee a brutal European war, this time in Ukraine.

“In war, you learn to be afraid of strangers and others. It wasn’t until I was in the camp that I learned to connect with strangers again and having art was so important as a way of expressing publicity,” he told AFP. AFP.

But his new show emphasizes the importance of being guided by an expert in psychology.

His co-curator, Amy Zion, said she was concerned about seeing images of Ukrainian children being used to portray the war in newspapers recently.

“It worried me that it could so easily become a journalistic trope,” she told AFP.

“Petrit had a psychologist trained to work in traumatic situations who really understood how to frame the situation as therapy first and foremost, not as something to be instrumentalized.”

Perhaps this is why many of the drawings did not feature violence, but rather peaceful scenes of nature and animals.

Revisiting them, Halilaj was fascinated to rediscover elements that suggested other issues that stirred in his young mind.

It highlights the huge colorful peacock that now dominates the exhibition space in Paris.

“Obviously that was also me dating in silence as a queer teenager. When I see the colors, I think: it’s a pride parade!” he laughs.

“I had more to do inside than just the war.”