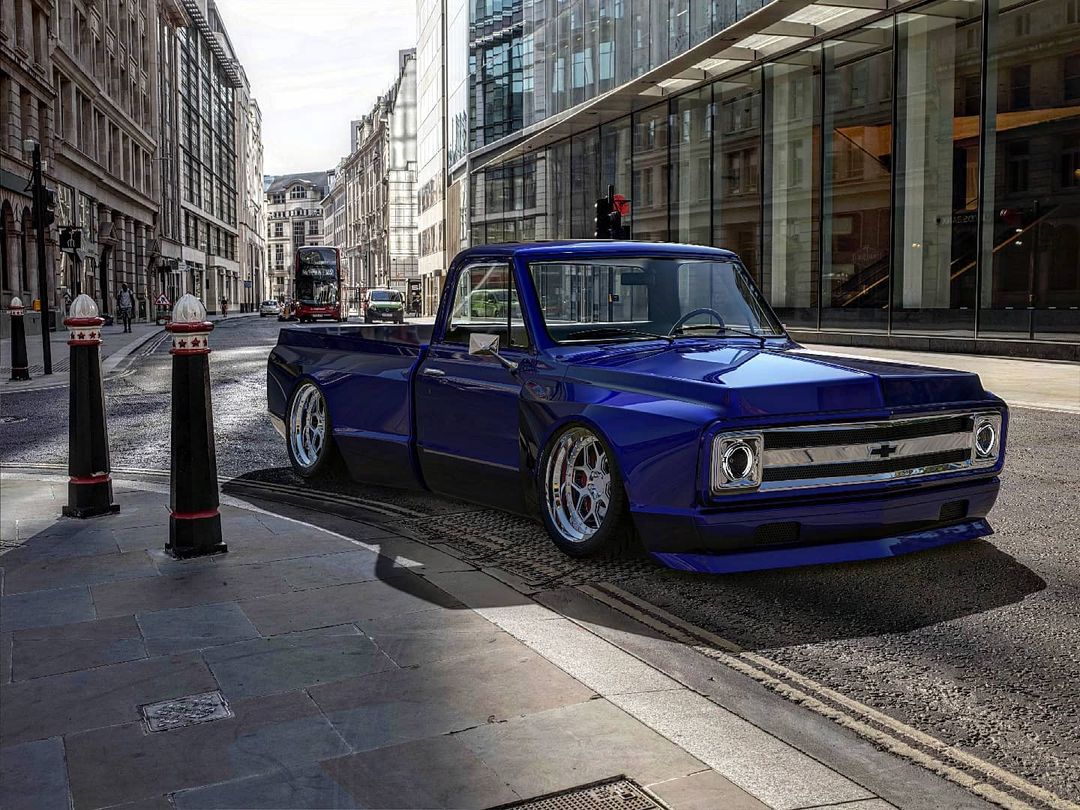 Everyone likes a good â€œfish out of waterâ€ interpretation. But this particular Chevy C10 restomod looks so entirely American and out of place in a London context that it instantly reminded me of a classic 1980s movie.

“An American Werewolf in London” was premiered in 1981 by John Landis as a horror comedy. In case Landis’s name sounds familiar to car enthusiasts, it’s because he’s also responsible for “The Blues Brothers”. So it’s kinda fair that when I saw this C10 which looked so electric blue with the iconic London double decker bus coming from behind … I couldn’t help but do the link.

Besides, I can only imagine the horrid and comedic cries of indignation coming from posh Brits at the sight of such an absurd American-looking construction. Perhaps it is for the best that it is forever destined to remain wishful thinking. After all, the cool C10 served as a ruse for a shameless Black Friday promotion from Emmanuel Brito, the virtual artist behind the personalizatuauto account on social networks.

But I still love him, even though he was just trying to help promote a company that specializes in high-res CGI backplates and matching HDRIs for 3D and CGI creations or VR applications. Since it’s outrageously out of context, let’s focus a little on the vehicle itself, okay? One thing is certain. It is a traditional C10 restoration through and through.

Complete with a cool electric blue (check out the gallery and embedded posts below for more projects with the same paint job, they won’t disappoint) and all the chrome accents you would expect. The stance is complete thanks to the slammed / pocketed suspension system, while the shiny aftermarket wheels seem to hide the red brake calipers for full stopping power.

Sadly, I have no idea what the artist had in store in terms of powertrain prowess. But for our werewolf purposes, that should be something strong and obnoxious … maybe a 5.2-liter Voodoo V8 swap for a Blue Oval to subtly follow the theme ?!