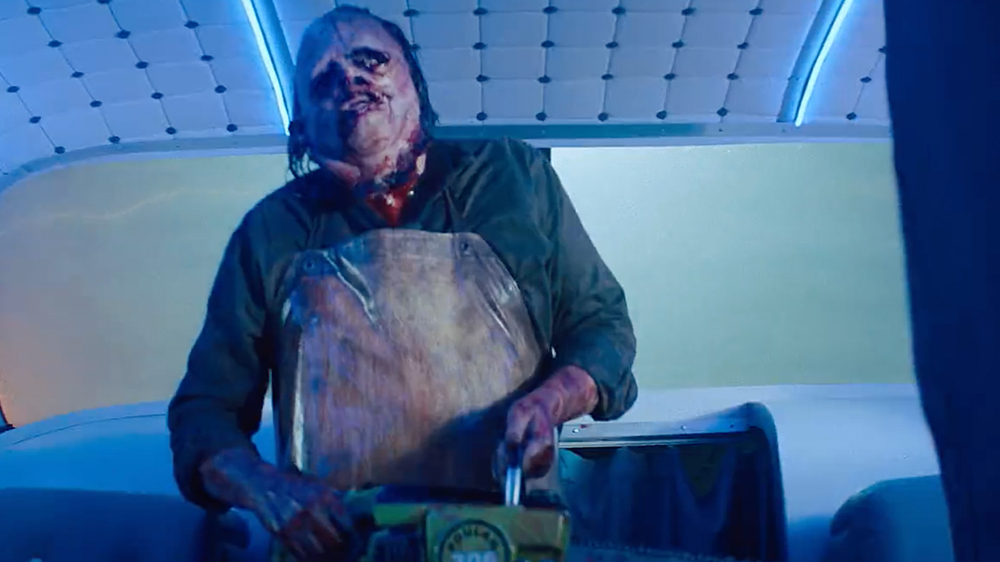 For 10 years, Illusion Industries has been delivering Hollywood movies, TV shows, music videos and commercials with all kinds of unique props, special makeup effects, full-fledged creatures and poseable puppets. Todd Tucker, the founder of Illusion Industries, has 30 years of experience in the industry, having originally traveled from NorCal to SoCal to pursue his Hollywood dreams.

Tucker’s latest showbiz challenge at Illusion Industries was to design and produce a new version of Leatherface, the iconic and misunderstood murderer of the Chainsaw Massacre who has carved out a place for himself in horror history over the past 50 years. Although the franchise has migrated from the big screen to Netflix, the character still looms large among slashers, and this new chapter is shaped – as David Gordon Greenit’s Halloween before that – as a de facto sequel to the original film, which terrified audiences in 1974.

As the chief character designer of Illusion Industries, Martin Astle – who would later apply the makeup to sets in Bulgaria – kicked off the process by creating a clay sculpture of an all-new Leatherface concept on a generic human head. This approach convinced the film’s producers of the viability of a reimagined main character. Soon after, longtime effects artist Miles Teves came to Illusion Industries to provide additional two-dimensional designs for Leatherface’s face and head, while 2D artist John Donahue created concept art for the rest of the character’s body, including the wardrobe.

Once the character design was approved, Illusion Industries did a head casting on the actor playing Leatherface, Mark Burnham. “Martin re-sculpted the design onto the cast of Mark’s head,” Tucker said, noting that the eventual makeup was a one-piece silicone face. “Rather than sticking the silicone device on Mark’s face, we created a vacuform skull cap for the face and head that Mark would wear. The cap had Velcro tabs and we were able to fit Velcro into the facial device. Martin was then able to put face on Mark and the stuntmen in seconds.

Importantly, Burnham would wear the device for long hours each day he filmed. “We knew Mark would want to remove the face between camera setups, so coming up with the Velcro cap method was pretty significant and made everything easier and faster for Martin on set,” Tucker divulged. “It was an experimental approach that worked wonderfully.”

Depending on how the silicone device was positioned on the vacuform cap, Astles was able to give the face subtle changes in expression. Tucker explained that “it gave us the ability to tweak Leatherface’s emotion slightly, depending on what’s happening in the story. Mark had makeup under the facial apparatus that included aging, scarring, dirt and the fake teeth.You don’t see this look for very long, though you do see parts of his face under the facial device – just enough skin to remind you that there’s a booby under the cut face.

It should be noted that the aforementioned face of Leatherface is based on one of the other actors in the film. “Leatherface cuts and wears her mother’s face like a character that was killed by strangers,” Tucker said. “There was only one sculpted version of the face that looked very different at the end of the movie. The face goes through multiple levels of blood and destruction depending on what happens in the movie.

In Bulgaria, Astles applied make-up and cut face daily. There were many faces to choose from, depending on the stage of bleeding Leatherface had endured in the scene before the one pictured. “One of the challenges of this show was blood continuity,” Tucker detailed. “We had over 25 different cut face devices with different levels of blood on them. The film wasn’t shot in an exact order, so Martin created a photo reference book so he knew exactly which bloody face was needed each day. It has become a bit of a science. »

At one point, producers Herb gains and Fede Alvarez asked Illusion Industries to show them a drawing of Leatherface wearing the dress of the woman whose face he wears. “After seeing the design, they moved away from that and went for a more traditional look,” Tucker noted. “They wanted us to strike a unique balance between old and new. It was an opportunity to evolve the Leatherface look into the present day.

Ultimately, Tucker and Astles led the Leatherface character, with other artists following their lead at Illusion Industries. “Once we locked down the face, hair, and body design, it was time to find a team that was ready to come work in my studio when the pandemic shutdown began,” Tucker said. “Fortunately, I was able to convince a handful of amazing artists to come to work.”

As the owner of Illusion Industries, Tucker has some advantages in being able to understand how makeup effects are produced. Significantly, Tucker recounted that being a multi-faceted effects artist for 30 years gave him certain advantages in running his business. “It makes it easier because you understand how long things take to do; you understand the materials and the process,” he said. “I’m hands-on and very passionate about design and stay creatively involved. Managing the business aspects of Illusion Industries takes up a lot of my time, but I’ve managed to strike a good balance between being an artist and a business owner.

Many makeup and practical effects stores in Los Angeles now have giant 3D printers to instantly manufacture properties and devices with new technologies, but Illusion Industries tries to do as much as possible by implementing methodologies “old”. “I believe you can feel the difference organically,” Tucker commented. “I still like to design and create things by hand. My studio is like how FX studios was set up when I started [in the early 1990s]. I’m definitely old school, but it’s important to keep up to date with materials, tools, and methods. I try to keep a positive atmosphere in the studio, a place where you can be inspired and creative. I feel like I get better work from my artists if I keep the environment fun.

It should be noted that Illusion Industries can create any type of device in a variety of materials, including foam latex, gelatin, silicone, and various combinations; however, silicone was selected to create Leatherface for the new Chainsaw Massacre. “Silicone has been around for a long time now,” Tucker explained. “The choice of material we use when creating something depends on what the final look and function should be. For Texas Chainsaw, we use silicone because we wanted the cut face to look like cool, translucent skin. It is possible to paint the latex foam to make it look translucent. Silicone is great for age and character devices, but it’s much heavier than foam, so there are times when it’s better to use foam, simply because it’s a lighter material. .

In terms of purchasing effects supplies for projects done in the Illusion Industries store, Tucker used two companies. Both Movie effects and Beauty Friends supplies have almost everything needed for special effects makeup. “They both carry materials for head and body casts, sculpting, casting, silicone, latex foam, blood and makeup, pretty much everything we use in my studio” , revealed Tucker. “Both companies are also very good at shipping the equipment you need to filming locations. There are a number of different providers, but I tend to use these two because they’ve been so good to me. »

Admittedly, Leatherface falls into the pantheon of great horror slashers; obviously the original Texas Chainsaw Massacre Leatherface is an icon along with Freddy Krueger, Jason Voorhees, Michael Myers and Chucky. As such, Illusion Industries faced precise pressure to add to these indelible screen personas. “When asked to recreate something as iconic as Leatherface, there is a certain level of fear,” Tucker revealed. “When the character is so adored by horror fans, it’s about finding a way to make it feel new, without losing the essence of what fans love about that character. That’s really the challenge: more than anything, designing the character to work as a contemporary version of that character but also with the spirit of what made him great.

“For us,” Tucker continued, “I think this version of him might be the most organic. It looks very real; everything we’ve done is very anatomically correct – the level of what the face looks like when it’s cut is based on real research of what skin would do, and we tried to make it anatomically correct and disturbing. This Leatherface is faster and more agile. You also get a glimpse of the human underneath, and maybe you even feel a little sympathy for him.

Naturally, everyone at Illusion Industries saw the possibility of creating a new Leatherface as a momentous opportunity. “We were very honored to have the opportunity to recreate this character,” Tucker remarked, “and we hope we’ve created a Leatherface that fans will truly love.”

After completing Chainsaw Massacre, Illusion Industries created 26 different creatures for an original movie for Netflix. For this project, Tucker went to Atlanta to oversee things and play two of the characters, which he found a lot of fun. “It’s coming out this Halloween on Netflix,” Tucker said, noting several other projects he’s been integrally involved in on set. “We also did a commercial, where we made six different puppets for the Florida Lottery Christmas commercial, and I flew to Florida and got to be a puppeteer and be the voice for all of these characters. “

Finally, in addition to providing practical effects for films, Illusion Industries also produces original film projects under a separate company. Previously they produced New Year’s Eve Terror, a fantasy horror film based on a true story from Tucker’s childhood. Next, Tucker is making another home movie for which Illusion Industries will create a number of character makeups.

“We have a lot of amazing things happening in 2022,” Tucker promised. “Stay tuned!”