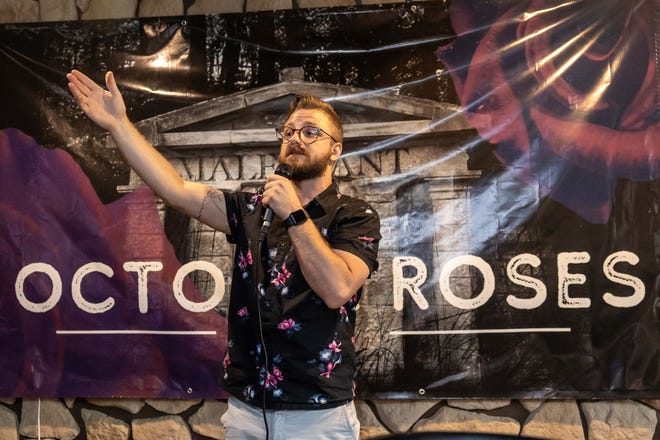 Ohio holds an interesting place in the horror movie zeitgeist.

It’s full of haunted places, movies are shot and filmed here, and some of the genre’s most recognizable names are tied to the state in some way. Wes Craven, for example, is from Cleveland and shot his 1984 film, “A Nightmare on Elm Street” in the fictional Springwood, Ohio.

AFTER: Kent Stage Celebrates 20 Years of Music in Northeast Ohio

AFTER: Friday the 13th is a lucky day for fans at northern Ohio haunts that will open for tours

Filmmaker Brandon Lazenko, a Stow native and Kent State University graduate who now lives in Kent, is striving to add his name to the list of notable Ohio horror luminaries.

His latest project, which he produced and directed, “October Roses,” is a short film adapted from Stephen King’s short story “Nona,” published in King’s 1978 anthology “Shadows.”

The plot revolves around a retired professor hitchhiking through his hometown. A storm forces him into a truck stop where he meets a woman named Nona.

“From there, she traps him, kind of like a succubus, and he starts making decisions that he might not be making if she weren’t involved in the situation,” Lazenko said.

The humanity at the heart of the story is what drove him to pursue the creation of “October Roses”.

“It’s the story of what seems like an ordinary person placed in an extraordinary situation and seeing how it unfolds,” Lazenko said.

Lazenko is reluctant to give too much plot detail. However, he says, his interpretation differs from King’s version of the story.

Typically, buying the rights to a story for a film adaptation can be expensive, but “Nona” was part of King’s Dollar Baby program.

Since 1977, King has licensed adaptations of his short stories by independent filmmakers and students for $1, on the condition that he retain the film rights, that the dollar deal film not be released without prior approval , and that he receive a copy of the finished work.

As is tradition in indie horror, Lazenko works with tight budget margins. The production is expected to require $60,000, which the cast, crew and producers are working diligently to secure. Currently there is an active Seed and Spark campaign.

At the more expensive end of the spectrum, generous souls donating $5,000 will receive an executive producer credit, a visit to the set (travel expenses not included), the opportunity to purchase any trophies the film wins at festivals, awards and all lower tier incentives.

Lazenko has been working to publicize the film in order to secure funding by August 1, so filming can begin on August 16. He hopes to find his white whale investor.

“I know there’s someone out there who’s a Stephen King horror movie buff who has $60,000 and would be in a mutually beneficial situation where he could be part of a really cool, and we would get to do something cool to show people,” Lazenko said.

In addition to the Seed and Spark campaign, there have been two in-person fundraising events so far. On July 15, the cast and crew descended on Dynasty Lanes in Willard, Ohio for their second fundraiser; a movie trivia night, bowling, raffles and a silent auction.

Two nights prior, at the Red Fox Sports Pub & Grille in Cuyahoga Falls, the production held its first fundraiser which was much the same as the second – movie trivia, silent auctions and raffles – but was followed by two of “October Roses”” Executive Producers: Horror icon Robert Kurtzman and his wife Marcy King (no relation to Stephen King), both from Ohio themselves.

Kurtzman, in addition to his long career as a special makeup artist and occasional director, has also worked on Stephen King adaptations, as has Marcy. Recently they worked together under Kurtzman’s effects company, Robert Kurtzman MUFX on “Gerald’s Game” and “Doctor Sleep”.

Securing their participation was a matter of demand. Lazenko said he reached out to Marcy and her husband out of the blue and pitched them the project. He made the call on Friday the 13th, a lucky day for him, he said.

When Marcy heard from Lazenko about the low budget they were working with, Lazenko said she didn’t know how to help.

“I kept explaining that we’re Ohio-based filmmakers,” Lazenko said. “We bring in students from Kent State as an opportunity to build a resume for them and give them networking opportunities…I just introduced him to my passion for this project.”

Marcy said when receiving cold calls, it’s important to separate the chaff from the wheat. They sometimes get “weird” calls, she said.

“Brandon not only struck me, obviously, with his legitimacy, but also with his passion and enthusiasm for the project,” Marcy said. “I was asked, ‘how did you get your job,’ and I said, ‘because I asked for a job,’ and Brandon was very much like that too.” It was this enthusiasm that led her to convince Kurtzman that they should be part of Lazenko’s film.

This isn’t Lazenko’s first rodeo. By his tally, he’s directed two miniseries and four shorts, including 2021’s award-winning “A Serpent by the Nest.”

While he admits that working alongside someone with as much industry experience as Kurtzman is daunting, Lazenko is excited about the opportunity to learn from him.

“I know that coming out of there on the other end, I’m going to be a different filmmaker and a better filmmaker, and that’s what excites me,” Lazenko said.