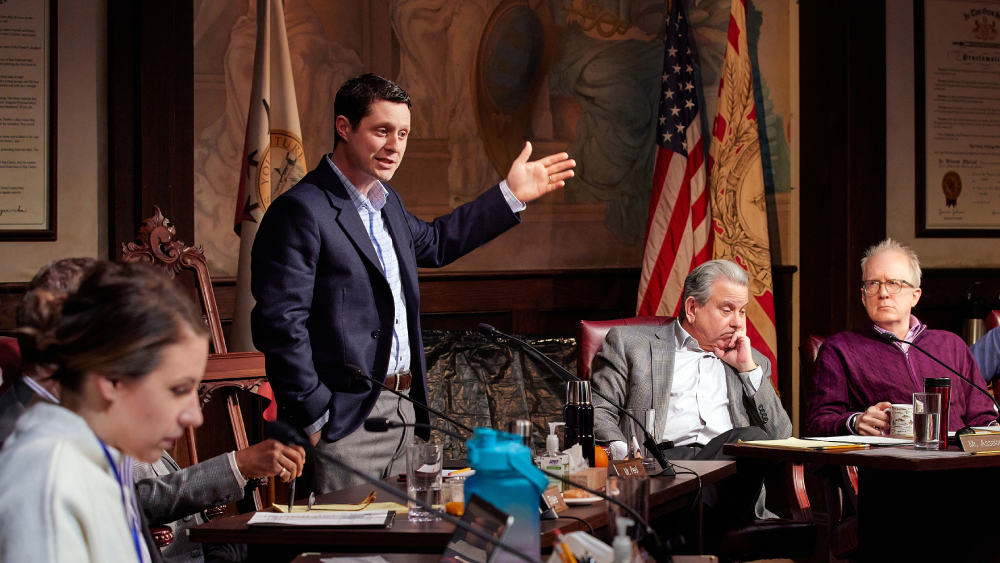 Some stories hide behind a disguise, hiding a horrible scowl. “The Minutes” is an astonishing feat by playwright and star Tracy Letts, not least for her brilliant finesse in orchestrating audience expectation and surprise. Entering knowing little or nothing about the play may be the purest way to experience its dramatic craftiness. (Reader, be warned.)

Even so, “The Minutes” doesn’t trade in secrets or shocking revelations. It exposes systems of illusion that blind people to truths buried in plain sight. It’s damn funny until it’s not. It is a fascinating and essential theater that questions the present by laying bare how history is written. And it’s one of the best new Broadway plays in years.

“A hundred years from now, will anyone care?” Seems like a fair question for Big Cherry City Council, the “wet sock of a city” where a dozen elected officials are battling over hyperlocal minutiae like stolen bikes and a city park overhaul. There’s a Christopher Guest quality to the daily nonsense that piles up as the officials (if we have to call them that) migrate around the room, joking about the snack cart. The meeting starts with a bang, and the banality both amuses and numbs.

Mr. Peel (Noah Reid of “Schitt’s Creek”) is the freshman of the group and something of a baby in the woods. Although he missed the previous week’s meeting to bury his mother, he is sunny, impatient and naive. (Fairy tales and rituals love an innocent orphan.) In contrast, the oldest statesman (Austin Pendleton) has served for 39 years, and could he please have a place of parking lot to show it? Seven men (all but one white) and three women (also white) gather for quorum.

The deeper, sinister undercurrents of the story creep in from the start, camouflaged in the boredom of the process. If every meeting includes a recap of the last one, where are the minutes for the one Mr. Peel missed? It seems unlikely that the clerk recording them (Jessie Mueller), who is dry and fussy, will be able to slack off. The mayor (Letts) might as well move on, and so would everyone else. But why is there an empty seat?

There’s deliberate intent in the foreboding of this Steppenwolf production from director Anna D. Shapiro, wryly signaling that “The Minutes” has a larger agenda. The town hall appears larger than it should be, with a vaulted ceiling that betrays signs of water damage (in a set design by David Zinn). Resounding thunder and zapping power outages punctuate the stormy night (conveyed in lighting design by Brian MacDevitt and original sound and music by André Pluess). Count the days and you will realize the time has come for terror.

The ensemble of Steppenwolf and Broadway veterans, including Blair Brown, Sally Murphy, and Ian Barford, play off each other skillfully, even though they mostly stay in their chairs. The stasis in Shapiro’s staging has a clear logic (how often does the seat of power change?) and contrasts sharply with the isolated bursts of physical action. The actors are nimble with Letts’ biting, deceptively situational humor and embody their characters’ creepy complacency.

“The Minutes” is both a political comedy and a wicked, methodically plotted horror show, much like American democracy and its original sins. The razor-sharp edge of the coin is all the sharper when polished with an easy wit, like tickling a captive before letting go of the guillotine.

It probes the big intractable questions posed by the social order, like what people owe each other, how responsibility is avoided, what stories are told and which are erased. And it shows us the people who have long answered these questions behind closed doors, in a self-preserving system with blood on their hands. Look down, and you’ll see it for yourself too.