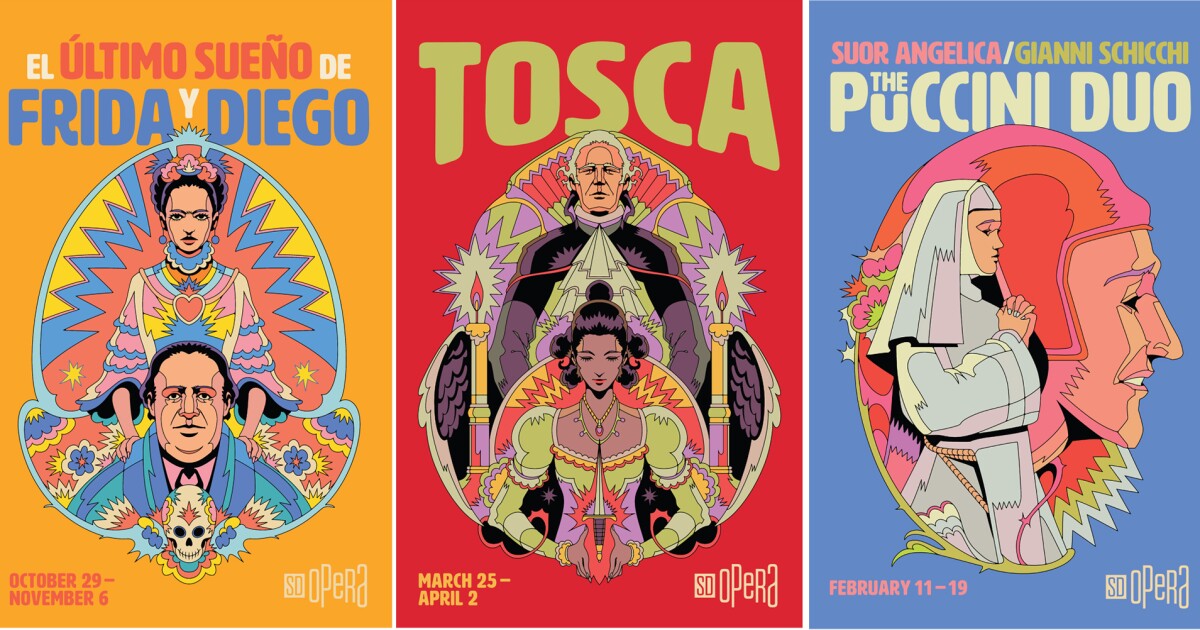 The season kicks off October 29 through November 6 with the new opera by composer Gabriela Lena Frank and librettist Nilo Cruz, which translates to “Frida and Diego’s Last Dream.” It is the fictional story of Mexican muralist Diego Rivera praying for a final visit from his late wife, painter Frida Kahlo, who returns from beyond on Day of the Dead to rekindle their passion one last time.

“San Diego has a rapidly growing Hispanic population and with that in mind, we decided to explore illustrators who would provide this infusion of Latin culture to celebrate the new season and world premiere,” Esser said in a statement.

The new logo has a playful, younger look and bold colors, and the new marketing tagline, “Every Voice Tells a Story” reinforces the company’s mission to tell stories that celebrate the expressive power of the human voice.

At the same time, Esser was tasked with finding a new artist to design the show’s posters for the 2022-23 season. In recent years, the posters have been designed by artist R. Black. For the upcoming season, San Diego Opera and Esser Design have chosen Urias, an artist based in Chihuahua, Mexico. His artwork and illustrations blend his own Mexican heritage with influences from Alphonse Mucha’s Art Nouveau, 60s psychedelic poster art, Austrian Art Deco and graphic designer Milton Glaser. .

Urias said in a statement: “I was excited about this project because it’s my first time working on an opera project. When I researched, I learned that there was already posters made 100 years ago for operas. I am delighted to be part of this heritage and this tradition.

Matt Graber, who recently joined the San Diego Opera as chief marketing officer, said the company’s ticket sales got off to a good start this year, which “already shows…that our community looks forward to this incredible season. The work that Esser and Raul have done will only amplify that excitement.

The season continues with: “The Puccini duo: Suor Angelica/Gianni Schicchi”, from February 11 to 19; “Tosca” by Puccini, from March 25 to April 2; the world premiere of “Ghosts” by Nicolas Revèles, a trio of one-act operas inspired by horror, from April 14 to 16; and “The Falling and the Rising” by Zach Redler, May 12-14.

Kragen writes about theater and opera for the San Diego Union-Tribune. Email him at [email protected]