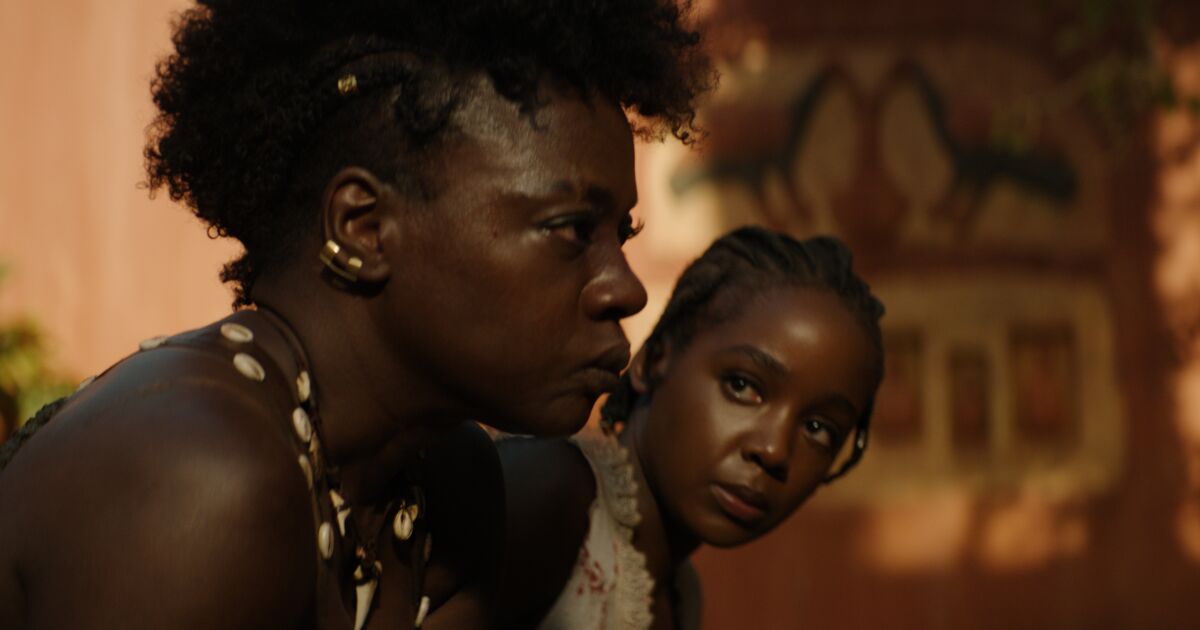 Good morning! I am Mark Olsen. Welcome to another edition of your usual field guide to a world of Only Good Movies.

More Venice and Telluride. It may not be a boom time for new theatrical releases, but there are plenty of new movies to talk about, as the fall festivals showcased plenty of titles set to release over the next few months. .

From Telluride, Josh Rottenberg gave a survey of the winners and losers of the festival, moving away from what many considered an overall muted event. “Bones and All” by Luca Guadagnino, “Women Talking” by Sarah Polley, “Tár” by Todd Field, “Armageddon Time” by James Gray and “Bardo” by Alejandro G. Iñárritu are just some of the films that got people talking one way or another. at the party.

Glenn Whipp seized Oscar chances from ‘Bones and All,’ a cannibalistic romance that stars Timothée Chalamet and Taylor Russell in what Glenn described as “a love story wittily suited to Terrence Malick’s ‘Badlands.’ and possessing a keen understanding of what people on the margins of society have to do to survive.

Justin Chang has written more deeply about a number of films from the festival. He paired “Tár” and “Empire of Light” by Sam Mendes, as well as “Women Talking” and “Bardo”.

Josh spoke to Iñárritu in Telluride. “Bardo” is the filmmaker’s first film made in his native Mexico since his debut, “Amores Perros”, and is a deeply personal exploration of the meaning of life and art. Which also meant that the two-time director’s Oscar winner seemed particularly stung by some of the backlash from Venice and Telluride.

As he said, “Every artist has the right to express themselves in their own way without being accused of being complacent. I hope someone can refuse this narrative, which is very reductive and a little racist , I must say.

Justin concluded his Telluride coverage with “Bones and All,” “The Wonder” by Sebastián Lelio, and “Lady Chatterley’s Lover” by Laure de Clermont-Tonnerre.

And Justin also wrote about Olivia Wilde’s ‘Don’t Worry Darling,’ which premiered in Venice amid much tabloid gossip and internet chatter about the behind-the-scenes drama during its production and tour. current press.

Do you like this newsletter? Consider subscribing to the Los Angeles Times

Your support helps us deliver the news that matters most. Become a subscriber.

The Toronto International Film Festival is in full swing this weekend, and we have a team of reporters and photographers covering all the action.

Michael Ordoña, Jen Yamato and I presented 21 of the best world premieres of the festival, including “Glass Onion: A Knives Out Mystery” by Rian Johnson, “The Woman King” by Gina Prince-Bythewood, “The Fabelmans” by Steven Spielberg, Tyler Perry’s “A Jazzman’s Blues” and many more.

As TIFF CEO Cameron Bailey said of the fall festival season: “Every festival has its own special sauce. And in Toronto, our audience has always been that to us – their ability to find movies that really pop and support them and be excited about them as soon as they launch here. And so where the filmmakers and the companies want that… the reaction of Toronto audiences, then that becomes a priority.

I spoke to Perry for a soon-to-be-published story about the period romance drama “A Jazzman’s Blues,” which marks its first time at TIFF and the first of his films to premiere at a major film festival. Perry wrote the screenplay 27 years ago, but always knew he would return to it.

“I always knew I would at some point,” he said. “I never knew exactly when. Over the years, I focused entirely on success. As a black filmmaker in Hollywood, especially in years past, you couldn’t have a flop, and take your chance on a period piece like ‘Jazzman’s Blues’ was definitely a risk. So I stuck with what I knew would work, which was all my Madea shows, bigger and wider, “Why I am married?” shows. Because I wanted to build a brand and build the studio and build all these things that I have now and then I could go back to ‘Jazzman’ and other movies that I’d like to write and produce as well .

Thursday night saw the premiere of “Weird: The Al Yankovic Story,” which stars Daniel Radcliffe as the famed parody musician in a parody of musical biopics. The real Yankovic co-wrote the screenplay. Radcliffe spoke of the film’s relationship to reality: “I’m playing a version of Al, I think it’s fair to say…a version that does crazy things that this man would never do.”

I also spoke to Emma Corrin about the film ‘My Policeman’, directed by Michael Grandage and premiering at TIFF on Sunday, in which Corrin stars alongside Harry Styles and David Dawson in the story of a love triangle and the impact of decades of deep betrayal.

Corrin said of what attracted them to the role: “It was about issues that were obviously incredibly prevalent in the 1950s, homosexuality being illegal, but also I think [the film] talks about many problems that are still widespread today. I think people will go to see it thinking it’s going to be something about another era. And in fact, maybe that’s what we should be talking about now.

Do you like this newsletter? Consider subscribing to the Los Angeles Times

Your support helps us deliver the news that matters most. Become a subscriber.

Written and directed by Zach Cregger, until now best known as a sketch comedian, “Barbarian” is a disturbing horror tale. Tess (Georgina Campbell) arrives late at a rental house to find it’s already occupied by Keith (Bill Skarsgård). They decide to share, which seems to work until they find themselves drawn into the basement. Things get worse from there. The film is currently in theaters.

For The Times, Katie Walsh wrote: “Consider this permission to stop reading this review right now and just buy tickets. Skip the trailers, read the reviews, head straight to the theater for one of the most brilliantly executed, incisive, and chilling horror movies of the year. How do you describe ‘Barbarian’ without giving away all the best twists? Well, it’s a triumph of what could be a new subgenre: Airbnb horror.

For The New York Times, Beatrice Loayza wrote, “Cregger isn’t as concerned with making bold political arguments as he is with orchestrating a catchy spectacle that unfolds at a mile a minute. #MeToo, gentrification, the brutal underbelly of the Reagan era – all of these fit together like puzzle pieces in a larger nightmare that lets the context speak for itself. “Barbarian” is all the scarier — and fun — because of it. »

For The Hollywood Reporter, Frank Scheck wrote, “Director-screenwriter Cregger displays obvious perverse glee as he guides his audience through his outlandish twists. While the ultimate reveals involving a truly terrifying character (Matthew Patrick Davis, in a virtuoso turn) lean towards the formula, they take nothing away from the overall effect, and the hearts of cynics will be gladdened by the very dark ending, which have makes George Romero smile.

Directed by Eva Vitija, “Loving Highsmith” is a documentary portrait of Patricia Highsmith, author of “Strangers on a Train”, “The Talented Mr. Ripley” and “The Price of Salt” (adapted in the film “Carol”). Gwendoline Christie reads from Highsmith’s journals and manuscripts as the film’s narration, which attempts to connect fiction to Highsmith’s dark heart with a love life.

For The Times, Gary Goldstein wrote: ‘Given that such a private and enigmatic presence as famed thriller writer – and unwitting queer icon – Patricia Highsmith may not constitute the easiest cinematic dissection, the documentary’ Loving Highsmith’ earns points for digging up as much as he does. … [The film] is a well-intentioned effort; a respectable start. But perhaps a more definitive, dimensional documentary — or even a narrative feature — about this singularly intriguing talent will yet be made.

For The New York Times, Amy Nicholson wrote, “It’s hard to imagine the author herself would have approved of the documentary’s flowery narration and sentimental acoustic score. More impactful is the realization that Highsmith’s most chilling calculation was correct: she would inspire more cheers — and less moral outrage — by exposing her murderous hatreds than her strangled loves.

For the Washington Post, Ann Hornaday wrote: “Filmmaker Eva Vitija explores the life and career of author Patricia Highsmith through the prism of her love life, a form of psychobiography that brings the subject into focus, to make it elusive at the end. . … Ultimately, ‘Loving Highsmith’ provides a valuable addition to the larger record of the author’s enigmatic life, rather than a comprehensive chronicle itself. Which might suit a woman who has always seemed to prefer just staying out of reach.