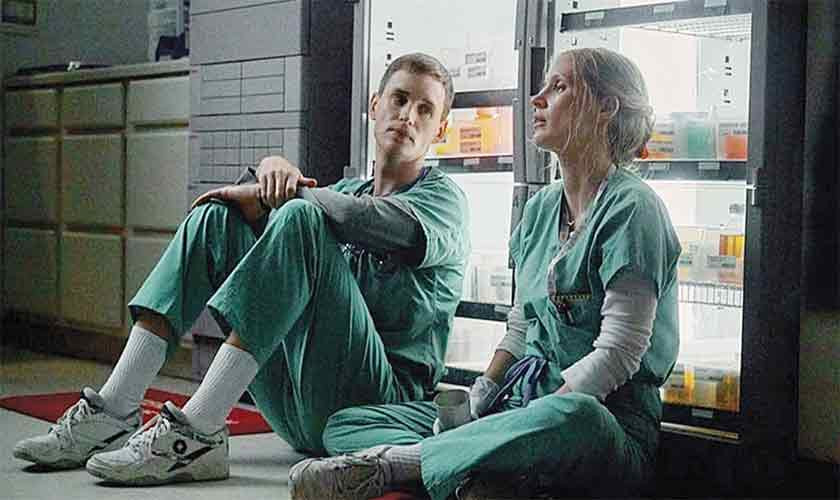 We can assume that the story of the most prolific serial killer in history has already been the subject of several podcasts, documentaries and numerous mini-series. But Charlie Cullen has been largely absent from the crime genre in general. In the latest Netflix movie, The good nurse, the serial killer is unmasked. The Netflix original, directed by Tobias Lindholm and written by 1917 and Last night in Soho co-writer Krysty Wilson-Cairns, evokes fear, horror and frustration in her audience.

Cullen was a silent killer who poisoned patients using intravenous tubes between the 1990s and 2000s. He killed at least 29 people while working as a nurse, although authorities put the number at more than 400 Given that his crimes are scattered, his victim count is unknown, and his motives are murky, telling his story is far from straightforward. His character is portrayed by Eddie Redmayne as a new employee at a New Jersey hospital in the early 2000s, when his killing spree ended. Amy (Jessica Chastain), a haggard single mother working nights trying to hide her cardiomyopathy, teams up with him.

We begin to understand that it’s all part of a bigger picture as the film paints a dark and detailed portrait of Amy’s condition and the struggle it takes to get and pay for medical help. The film is a critique of the complex healthcare system. Amy has to work there for a year before she can get health insurance through her job. The doctor – who charges her $980 for a test and consultation – can warn her that working in her condition could lead to death, but she has little choice as she is months away from that milestone.

When Charlie enters the room, he brings with him a divine reprieve in the form of someone to help Amy through the night shifts and cover her recurring attacks. The two get along well on and off the job, with Charlie besting Amy and her two daughters. Charlie respects her health secret, treats her with care and even steals medicine from the hospital. But as Amy’s patients begin to die on her watch, she chooses to work with the police, especially when it becomes clear that the hospital would stop at nothing to protect its reputation in the face of growing “medical neglect”. She begins to wonder who she is friends with when there is an investigation into an unexplained death.

Amy and Charlie take center stage as the focus narrows. It’s rather frustrating to see the gruesome details of Charlie’s early childhood kept under wraps in order to preserve mystery and avoid an overdose of trauma. It would have been more intriguing if Redmayne was able to do more than just create an eerie presence in this film..

Initially, the film rightly focuses less on Charlie himself and more on the institution that housed him. It is revealed that even if people in high positions were aware of misconduct in this or previous institutions, it would force them to accept responsibility, with it all going to greenbacks, aka dollars. This is shown after a patient dies, and the hospital reluctantly summons detectives (played by Nnamdi Asomugha and Noah Emmerich), seven weeks later, to investigate. As an evasive risk manager, Kim Dickens, a highlight, perfectly captures the cold, corporate image of Charlie’s newest hospital. His dialogue with the detectives, both perplexed by their situation, has a brilliant crackle.

Amy and Charlie take center stage as the focus narrows. It’s rather frustrating to see the gruesome details of Charlie’s early childhood kept under wraps in order to preserve mystery and avoid an overdose of trauma. It would have been more intriguing if Redmayne was able to do more than just create an eerie presence in this movie. The narrative forces him too much to do more than that, so he has to take a step back from Amy. As for Amy, it’s minimalism that’s skillfully used here for someone whose life is more concerned with those around her than her own emotional state and well-being. When her feelings surface and events force her to confront the terror in ways she doesn’t usually make time for, they always do so subtly but devastatingly. Particularly moving is the final scene in which she has to fight back tears. This is one of Chastain’s best performances.

The ultimate showdown between the two falls short of expectations as Charlie merely admits his actions without providing any explanation. Due to the way the narrative is structured, we are left behind. The good nurse is still a commendable, if not entirely remarkable, attempt to tell the story of a bad nurse. While it works well as a crime drama, it falls short as a crime thriller. The narrative does very little to investigate the serial killer’s psyche. It would have been better if Charlie’s atrocities and past had been explored more.

The writer is a independent contributor