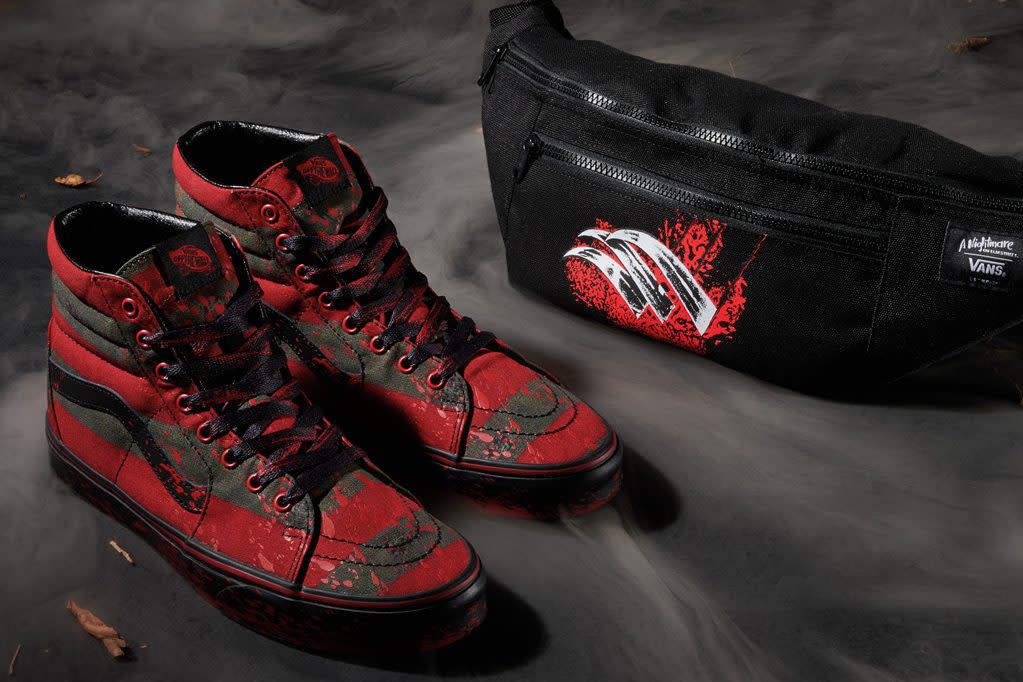 As the spookiest month of the year approaches, Vans has teamed up with Warner Bros. on the Horror collection, which is inspired by some of the most iconic horror films, including a tribute to “A Nightmare on Elm Street”. The lifestyle brand reinvents its classic styles with a range of shoes and clothing inspired by classic spooky scenes like the twins from Stanley Kubrick’s “The Shining”; the possessed characters of “The Exorcist” and “The Lost Boys”; the Jason Voorhees mask from “Friday the 13th” and the bloody graphics from “It”.

Freddy Krueger fans will have the opportunity to recreate their Halloween costume with “A Nightmare on Elm Street” sneakers featuring black laces with bloodstain prints. The Sk8-Hi style incorporates a dark color scheme in red, black and gray – a reference to the Freddy Krueger sweater.

As for the rest of the Freddy-inspired merchandise, the collection features a fanny pack with a bloody pattern and a T-shirt featuring Freddy’s boiler room scene from the movie – a true classic. The Vans Horror collection also includes sweaters, hats, t-shirts and joggers. Other styles of Vans footwear include a Pennywise-inspired checkerboard-covered Vans Era, a pair of bloody Slide-On slippers, the Slip-Skool, the Old Skool, and the Style 47 Creeper.

For most fans, director Wes Craven’s original masterpiece continues to be a popular theme during the Halloween season. But for those who need a story on how Freddy Krueger became one of the most feared villains, the Springwood Slasher was burned to the ground by the parents of his victims after his escape from prison. There is also a remake of “A Nightmare on Elm Street 3: Dream Warriors” which will reference its debut.

The shoes will be released on October 1 on Vans.com.

Vans has also created unique collaborations in the past inspired by Charlie Brown, Star Wars and even a popular Japanese artist Takashi Murakami.

The best of footwear