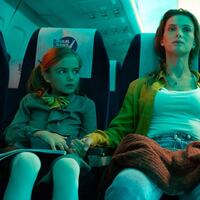 A young female doctor and her 6-year-old daughter perform an overnight flight in a severe storm. When the passengers on the half-empty plane inexplicably begin to die, the woman’s grip on reality weakens and she is forced to relive her worst childhood nightmare.

Aerial thriller Row 19 comes to North America to remind us that there are even more frightening things about flying than the rise in incidents of belligerent, drunkards, self-proclaimed a-holes.

Russian distributor Central Partnership announced yesterday that Well GO USA has acquired the North American rights to the thriller Row 19 by director Alexander Babaev. Row 19 opens in Russia on November 11; No word from Well GO USA on their plans yet.

The film will also travel to Latin America, the Middle East, South Korea and Italy.

Large Russian distributor Central Partnership (part of Gazprom-Media) announces series of global deals for Russian thriller “Row 19â€. The title was won by Well Go USA for the United States and Canada. It was also acquired for Latin America by BF Distribution, for Middle Eastern countries by Phars Filmco Motion Pictures, as well as for South Korea by Cinema Black and Italy by Minerva Pictures.

Alexander Babaev’s film will premiere in Russia on November 11 this year. The story centers on a young female doctor and her 6-year-old daughter who perform an overnight flight in a severe storm. When the passengers on the half-empty plane inexplicably begin to die, the woman’s grip on reality weakens and she is forced to relive her worst childhood nightmare. Producers of the film include Vadim Vereschagin (“Billion”, “Text”, “Son of a Rich”), Rafael Minasbekyan (“Furious”, “Frontier”, “Mermaid: Lake of the dead”), Dzhanik Fayziev (” Furious “,” Frontier “,” Mermaid: Lake of the dead “), Paul Heth, Michael Schlicht and Roman Stolyarsky.

“RANK 19 is a mind-boggling new entry into the genre that will prove to be quite capable of keeping audiences around the world at the edge of their seats, and we’re excited to team up with Central Partnership to bring the film to horror fans through North America, â€said Doris Pfardrescher, President and CEO of Well Go USA.

“RANK 19 is a high quality genre film, which keeps the viewer glued to the screen until the end. It will be equally scary and entertaining for audiences in any country, and we expect more global deals by the end of the year, â€adds Vadim Vereschagin, Producer, CEO of Central Partnership.